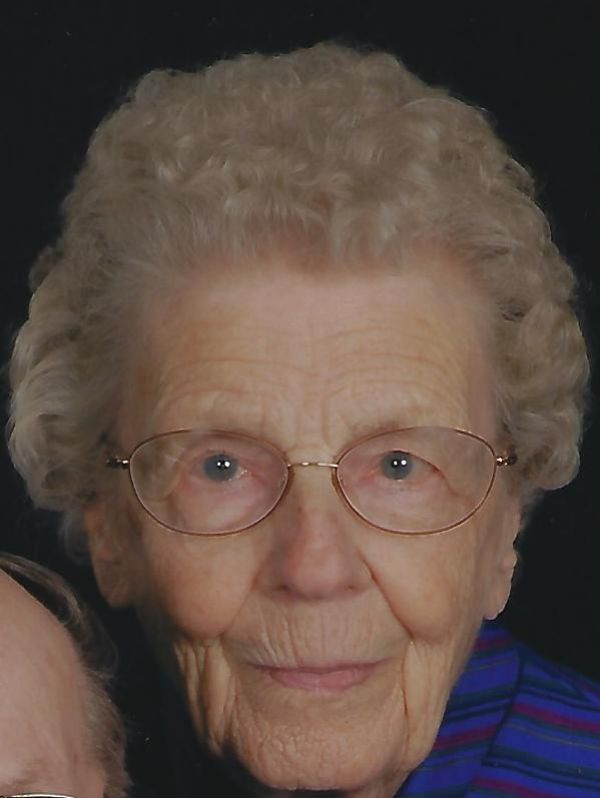 Wilma Bolhuis, 105, of Ellsworth, died March 23, 2022 at Meadow Brook Medical Care Facility in Bellaire. She was born on the Groenink farm in Banks Township on March 9, 1917, the first of Martin and Winifred (Burggraaff) Groenink’s six children.

Wilma attended Bentley Hill School, K-8, worked for her Uncle Hubert and Aunt Rose Bearss while attending 9th grade in Benzonia, was orchard boss at Fairman Orchards, and worked for her board and room in Ellsworth while completing high school. After a rollicking senior skip day, she graduated as salutatorian in 1934.

Wilma worked for her tuition, room and board and graduated from Western State Teachers’ College in Kalamazoo in 1936. For ten years she taught at Pleasant Hill and Mitchell Country Schools, Central Lake and Ellsworth Public Schools, and later did substitute teaching in Ellsworth and at Ebenezer Christian School.

Wilma taught during the Great Depression but said, “We didn’t realize there was a Depression. Everybody was in the same boat.”  As a country school teacher, Wilma skillfully built the fire (easy on the wood pile), played the piano for singing, did recess duty and janitor work, fulfilled state requirements and filed timely reports with the County Superintendent.

Wilma wrote “Country School Days” for Banks Township Historical Society, detailing life and learning in the country school system. She wrote, “The little ones learned from the older ones, and the older ones’ learning was reinforced by helping the younger ones. Students and teachers became a community... learned cooperation and built self esteem through a variety of skills… But rural schools were isolated. There was no telephone. In the winter the roads were not plowed. You were left to your own resources. If a child got sick, you cleaned it up.”

Wilma became engaged to Fred Bolhuis shortly after he was drafted into the Army in 1942. When Fred returned, they were married in Chicago on November 8, 1945. In 1946, they bought their farm on Pleasant Hill Road. They were blessed with three children. Besides substitute teaching, Wilma washed the milking machines, tended a large garden and did canning and freezing. She enjoyed baking bread and date-filled cookies.

In 1989, Wilma and Fred retired from farming and moved into Ellsworth. She enjoyed grandparenting, gardening, going for rides, taking long walks, picking cherries, making applesauce, playing Rumikub, and watching birds, squirrels, rabbits and deer. She enjoyed high school class reunions and Pleasant Hill School reunions where she was honored by the students whose lives and community she had helped to shape.

Wilma was a member of the Ellsworth Christian Reformed Church where she taught Sunday School and led the Coffee Break Bible Study. She was an honored member of the Antrim County Farm Bureau Women, volunteered at Meadow Brook Medical Care Facility, served on the Zoning Commission and worked as an election official.

Visitation will be held on Friday, April 1, 2022 from 6 to 8 p.m. at Ellsworth Christian Reformed Church. A service of thanksgiving for God’s grace in Wilma’s life will be held at the Church on Saturday at 1:00 p.m. with the Rev. James Zwier officiating with visitation one hour before the service. Burial will be in Atwood Cemetery. The service will be live streamed at www.ellsworthcrc.org/live and available on video afterwards.

Arrangements were made by the Hastings/Ellsworth Chapel of Mortensen Funeral Homes. Please sign her online guestbook at www.mortensenfuneralhomes.com.

To order memorial trees or send flowers to the family in memory of Wilma Bolhuis, please visit our flower store.
Send a Sympathy Card