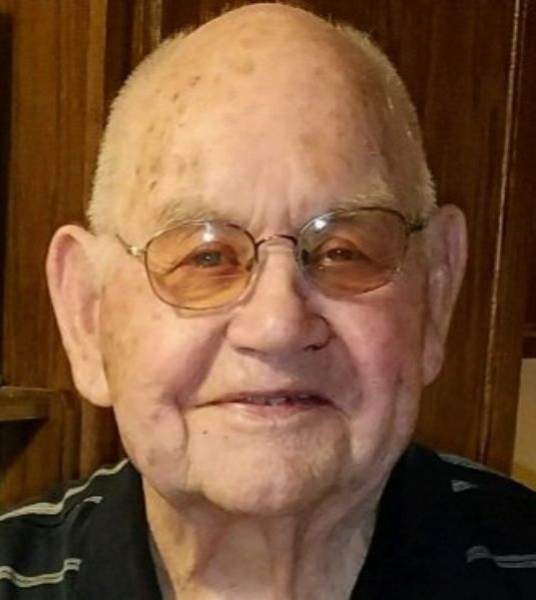 William “Bill” E. Ormsby, 95, of Charlevoix, passed away on Friday, September 9, 2022, surrounded by loved ones at the American House in Charlevoix.

Bill was born on April 16, 1927, in Buckley MI, the son of Ida (Hankins) Ormsby Johnson and Gordon Ormsby. Bill was raised in Buckley by his mother and his stepfather, Harrison Johnson. He attended Buckley High School, where he was drafted during his senior year to serve as a member of the US Army in Italy at the end of WWII. He returned two years later, finished his senior year, and married his sweetheart, Shirley C. Ormsby, in Buckley on November 1, 1947. They started their lives as a young couple in the greater Traverse City area, where Bill worked his way up to store manager with Kroger, also taking various odd jobs, such as selling Fuller brushes door to door and setting bowling pins at the local alley, to bring in extra money for his growing family. Shirley preceded him in death from Alzheimer’s in 2019, just a few months shy of their 71st wedding anniversary.

In 1964, Kroger asked Bill to go to Charlevoix to manage their new store there. He commuted for a couple years, going home to Traverse City or having his family visit him in Charlevoix, until the family eventually purchased a new home and relocated to Charlevoix in 1966. Over the next several decades, Bill would work for Kroger, Oleson’s, and Crago in Charlevoix and Petoskey, and Edwards IGA in both Boyne City as well as Charlevoix. He eventually transitioned into Real Estate, working for Pat Frisbey Century 21 in Petoskey until his retirement. But anyone who knew Bill knows that he never really retired. He worked the early-bird shift at the Next Door Food Store up until this past February, where he enjoyed his co-workers, his customers, and keeping up to date with the “pulse of Charlevoix.”

Bill was an active member of Bethany Lutheran Church, where he served as an usher and counter for many years, served a mean ham & eggs at Easter breakfast, as well as being the captain of their church league bowling team. He was also very active with the American Legion for many years, helping with Bingo and pancake breakfasts. He often served as part of the honor guard in the Memorial Day parade until it was time to “give the young guys a chance.” Bill was an avid Detroit Tigers fan, a disappointed Lions fan, and also enjoyed watching the occasional tennis or golf match. He rooted for both State and UMich, though he leaned toward Michigan when they played each other. He enjoyed classic country and big band music.

Bill would tell you his greatest achievement was his family. He was extremely proud of his & Shirley’s 3 children (and their excellent spouses), 7 grandchildren, and 8 great-grandchildren. He enjoyed his large family gathering at his house on Christmas and camping in his yard at Venetian. His secret to a long life – family, determination, persistence and hard work.

A Memorial Service will take place Saturday, October 15, 2022 at 10:30 a.m., at the Bethany Lutheran Church in Charlevoix. Pastor Ken Bernthal will officiate. A light luncheon will follow. Internment for Bill and Shirley will be at 1:30 p.m., at Brookside Cemetery for family, with military honors for Bill.

Arrangements have been made by the Charlevoix Chapel of Mortensen Funeral Homes.  Please sign his online guestbook at www.mortensenfuneralhomes.com

To send flowers to the family in memory of William "Bill" Ormsby, please visit our flower store.