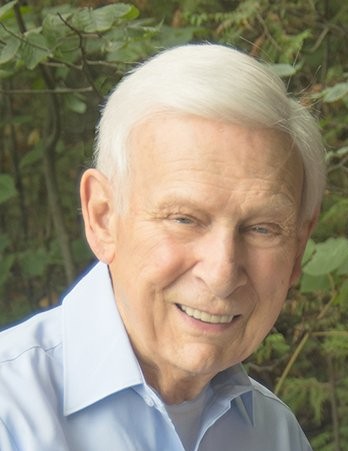 Walter J. “Walt” Martin, resident of Kewadin, Michigan, age 90, died the evening of January 1, 2021 from natural causes at home with his wife by his side. Walt was born September 15, 1930, the son of Walter Anthony and Marie “Mary” Martin. He is survived by his loving wife, Norean A. Martin; his children, Dr. Eric D. (Eva) Martin (COL) of Martinez, GA; and Kimberly A. (Karl R. Olsen) Martin of Newport, PA.

In 1953, Walt obtained his Bachelor’s Degree with a major in Industrial Management and Industrial Engineering from Wayne State University where he met his future wife, Norean Compton. On August 21, 1954, he married the love of his life, Norean “Nonie.”  He proudly served in the United States Army from 1956 to 1958. Walt began his career at the Ford Motor Company in 1958 where he worked until his retirement in 1997. Walt fulfilled a promise to Norean when the two built their retirement home on the shore of Lake Michigan with a view of glorious Up North Michigan sunsets.  Home and gardening projects were his pride and joy.

Walt was a car guy, a train collector, and a history buff. During his career in the automotive industry, he made it his business to know every brand, foreign and domestic, every model and year by sight.  Friends who tested him seldom caught him off guard.  His vast 30-year train collection was more than a hobby.  It was an opportunity to research the history behind each train and the era of its  prominence. He enjoyed sharing those stories.  In a letter he wrote to his children, he explained, “My interest in cars and trains has  been a great ride.  It is my joy to share that passion with you.”  Walt’s ability to remember dates and event details spanned American history, especially WWII, Classic Movies, and family events. Walt was the family Wikipedia.

Walt’s strength of character was evident in the way he lived his life.  He is remembered for his unconditional love for his family, for his welcoming smile, his acts of kindness, his calm and optimism, his quiet and steadfast faith, his generosity, his ability to see the needs of others and provide outreach. “It’s not what you gather, but what you scatter that tells what kind of life you have lived.”

Mass from the Order of Christian Funerals will be celebrated at 11:00 a.m. on Friday, September 17, 2021 at Sacred Heart Roman Catholic Church in Elk Rapids with Reverend Robert J. Zuchowski presiding.  Please join Walter's family for a luncheon in the Sacred Heart Social Hall following mass.

To order memorial trees or send flowers to the family in memory of Walter Martin, please visit our flower store.