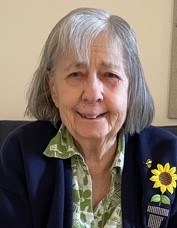 Virginia J. Smith left our physical world suddenly on Sunday, September 5.  She was born on March 20, 1932, the daughter of Eli Joseph Olsen and Celia Grace (Vaughn).  Virginia was very affectionately known as “Ginny, Aunt Ginny, Mom, Grandma, Grams, and Granny” to those who loved her.  Ginny was born to Eli Joseph Olsen and Celia Joyce (Vaughn) Olsen on March 20, 1932.

Ginny was an amazing wife, mother, sibling, grandmother and person.  She cooked, cleaned, and helped raise her younger siblings at a very young age so her widowed mother could work.  Her older siblings had families of their own; many of them enlisted in the military during World War II and shortly thereafter.  She graduated from Petoskey High School in 1950 and began her paid employment career working at Montgomery Ward.  She married Guy Linn Smith shortly after and eventually moved to his hometown, Charlevoix.  There they raised their four children and remained until Guy’s death in 1997.  Ginny kept the house and her cooking going for holidays, family meals, and picnics that she cherished until the years took their toll.

While raising her family, Ginny was employed at Gulf-Western in East Jordan in the 1960’s and eventually promoted to the role of parts inspector by the early 70’s.  Once her children had families of their own, she worked for the Char-Em Intermediate School District assisting and cooking for children in Ironton and later in Petoskey at schools for children with special needs.  Her legacy is the patience and kindness she gave freely to all children.  In addition, she was a fantastic cook:  preparing well-balanced (and delicious!) meals using vegetables and fruit from her garden:  fresh, canned, and frozen.  She did oh-so many other things that mothers do.  She liked to hunt (much to her husband’s delight!), snowmobile, ride her purple motorcycle, pick mushrooms, sew, knit, drink beer and eat pizza, to name just a few of her accomplishments.  Ginny ’s sense of humor and spunk were cherished by all who knew and loved her.

In lieu of a funeral, a graveside service will be held at the Brookside Cemetery at 3:00 pm on Friday, September 10th.  All who knew and loved Ginny are invited to a take-out pizza and beer celebration at Mom’s house on Loeb Road following the service.

The Winchester Chapel of Mortensen Funeral Home in Charlevoix are handling arrangements.

To order memorial trees or send flowers to the family in memory of Virginia "Ginny" Smith, please visit our flower store.