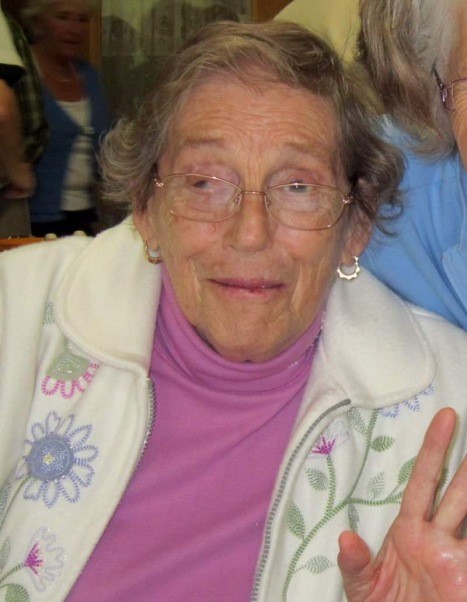 Virginia was born on November 7, 1922, in Jackson, MI, the daughter of A. Warren and Queena (Draper) Bather.

She was educated at Jackson High School then Jackson Junior College, followed by Michigan State University.

Moved to Chicago with first husband J.R. Doerner in 1949.  When Frank became ill, they retired and moved to Clam Lake on their summer home in 1975.  Frank passed away and she re-married Steve Nearing in 1978.  The two of them traveled in their motorhome from coast to coast and Canada to Mexico.

Steve preceded her in death in Mission, TX. And was buried in Mancelona, MI.

Following Steve’s death, she continued to live on Clam Lake then in October 2004, she moved to the Rapid River Meadow Condos.

Virginia was a longtime, active member of St. Anthony Catholic Church in Mancelona.

Recently Virginia was preceded in death by her closest family member and son Patrick Nearing.

She is survived by daughter-in-law Barbara Nearing of Sun City, AZ.

Virginia will be brought back home to Mancelona where she will be buried next to her late husband Steve Nearing.

Graveside services will be held Thursday, August 20, at 1 p.m. at Coldsprings Township Cemetery.

Memorial contributions may be made to St. Anthony Catholic Church, Mancelona, MI.

To order memorial trees or send flowers to the family in memory of Virginia Nearing, please visit our flower store.
Send a Sympathy Card