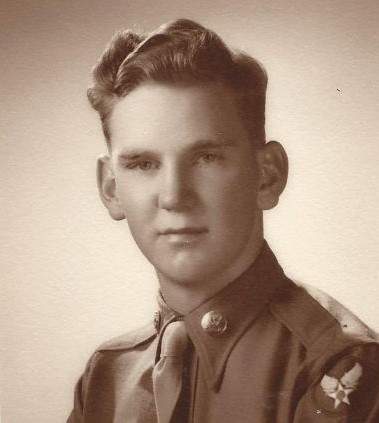 Verl Milan Wolgamott, 94, passed quietly into the arms of his Savior, on March 19, 2022.  Verl’s wishes were to die in his home, and due to the loving care and dedication of his wife and son Bud, his wishes were granted.

Verl’s life began on September 9, 1927, in Navarre, Ohio.   He was born to Lawrence and Amy (Shonk) Wolgamott, the oldest of six children. When he was a young boy, his family moved to the Ellsworth area and he would grow up there on the family farm.  In 1948, he enlisted with the US Air Force, and while working at Luke Airforce Base in Phoenix, AZ, he would meet his beautiful bride-to-be, Carolyn Kramer.  Their blind date would ultimately lead to marriage and they wed on June 4, 1951.  At the time of Verl’s passing, they had been married for 70 precious years.  They had a large family of eight children.

After his enlistment, the young couple purchased a one-bedroom log home in Central Lake, and it would become their life long residence.  Verl was a wonderful provider for his family starting with converting their small cabin into a four-bedroom home, to accommodate his large family.  He did all of the work himself, including hand digging the basement. He always had a beautiful garden which provided much of the family’s food.  His tomatoes and sweet corn were a summer delight!  He also grew a variety of fruits and was one of the first in the area to “graft” fruit trees, allowing him to harvest multiple varieties from a single tree.   For a while he had several cows, chickens, was a bee-keeper and tapped trees each spring.  He hand-chopped all of the firewood to heat his home.  This was his favorite hobby and he continued it into his nineties.  He was a talented wood worker and made many fine furniture pieces for his home, and that of his children.  He converted an old school bus into a camper and he and Carolyn took the family on summer vacations to Baja, Mexico, Washington DC and many points in between.  He could fix most anything, seldom buying new parts.  Instead, he’d scrounge around his shop and make do with what he had.

Verl retired from the Antrim County Road Commission after 31 years of dedicated service. A large part of his time was spent in the grader, and a road trip through Antrim County was always an opportunity for him to point out the different projects he had worked on.  He took great pride in his work.

Verl was a man of immense faith and a humble servant.  He was a life-long member of Belltower Reformed Church where he served as both deacon and elder. For a time, he was their handyman and initiated the church participating in the Adopt-A-Road Program.  He was well loved and respected in his faith community.   He donated blood for many years and was a volunteer with Meals on Wheels. He assembled boxes by the hundreds, for the Operation Christmas Child Program, which serves underprivileged children around the world.

The family would like to thank the absolutely fantastic hospice team that cared for Verl before his passing, especially Jennifer, Jenny, Sara and Mark.  You were truly Verl’s earthly angels!

Visitation will be on Friday, March 25, 2022 from 6-8 p.m. at the Central Lake Chapel of Mortensen Funeral Homes.

Funeral Services will be on Saturday, March 26, at 11:00 at the Belltower Reformed Church in Ellsworth.  There will also be visitation from 10:00 a.m. until the time of services at church.

Military honors will be performed at the end of services in the church.

Burial will be at a later date when weather permits in the Atwood Cemetery.

Memorial donations can be made to Belltower Reformed Church or Moms and Tots of Ellsworth.

To order memorial trees or send flowers to the family in memory of Verl M. Wolgamott, please visit our flower store.