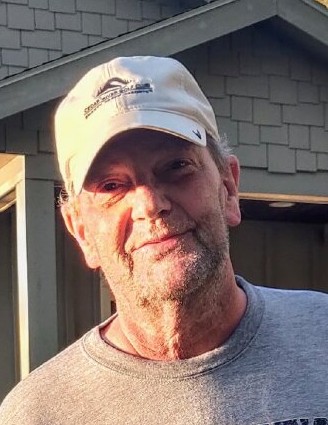 On March 31, 2021 Terrence Edward Ryan (Terry) retired his clubs for a final round at  the 19th hole of Heaven after a peaceful passing at his home in Bellaire, Michigan. During his life he spent many days and years sharing his love of golf with his friends and family, namely his buddy Bob and his son David. When Terry wasn’t playing golf, he was watching it on television along with “the fights”, UFC and boxing, and his new appreciation for NASCAR.  Terry was always good for a story from his past, including lots of laughs at his own expense or anyone else’s. Many times, Terry’s contagious laugh at his own jokes was funnier than the jokes themselves. Such stories and jokes were shared around a huge bonfire with his step baby, Cliff, and all who were lucky enough to join.

Terry was born on September 19, 1953 and grew up in Detroit, Michigan before moving to Texas and eventually northern Michigan. Meeting and marrying his wife, Brenda DiNofrio Ryan, sealed his status as a northern Michigan resident of Bellaire and Central Lake. Terry helped raise his instant family of five children, including the adoption of the youngest, David. In addition, Terry was a very involved stepdad to Cliff, Heather, John Paul, and Travis, teaching life lessons and how to be a man navigating through this crazy life. He was very proud of all his children for their hard work, building, teaching, and raising children.

Terry made meaningful friendships with coworkers and honed his “professional driving” skills at Dial-a-Ride, Shanty Creek Resorts, and the Bellaire Post Office before retiring. He was also very proud to serve as a volunteer firefighter and EMT. Stubborn from his Irish roots until the bitter end, Terry was often heard saying, “Don’t tell me what to do!”  The phrase often worked in his favor and became family banter. I know for certain, his boss, Monica, must’ve heard it more than once.

Terry was the only child of deceased parents, Daniel and Kathleen Ryan. He is also preceded in death by his wife, Brenda Ryan, and his in-laws, Marvelle DiNofrio and Paul DiNofrio.  He is survived by son, David, of Madison Heights, stepchildren, Cliff (Heather) Willson of Central Lake, Heather (Scott) Mills of Cheboygan, John Paul Willson of Central Lake, and Travis (Cathy) Willson of Kalkaska, as well as 11 grandchildren: Morgan and Logan Mills, Charlotte (Victor) and Wyatt Willson, Zoie and Cali Willson, Elliott, Isaac, Liam, and Sullivan Willson, and Madalynne  VanderZouwen.  While marrying a woman with five children may have been more than a little scary, having eleven children call him Grandpa was a bonus and made his life very special. In his final years, Terry shared his life and memories with his partner, Paula DiNofrio.  Other survivors missing Terry greatly include, cousins Jimmy (Michelle) Doherty and Dennis LaFerle, and best buddies, Bob Fletcher, Roger Gieseck, Bart Rison, and John Barnard, as well as his favorite boss, Monica, and his in-laws, Cynthia (Alan) Hickman of Bellaire and Sandra (Dean) Wade of Temecula, California.

A viewing will take place on Monday, April 5, 2021 from 11 AM to 2 PM at Mortensen’s Funeral Home in Bellaire. He will be laid to rest during a private burial at the cemetery in Central Lake.   Donations may be sent to the American Cancer Society.

Terry always believed we are not here for a long time but always here for a good time. So let’s all raise a “Ruby Booby” or other favorite drink as we bid Terry, Céad Mile Fáilte, a hundred thousand welcomes.

To order memorial trees or send flowers to the family in memory of Terrence Ryan, please visit our flower store.