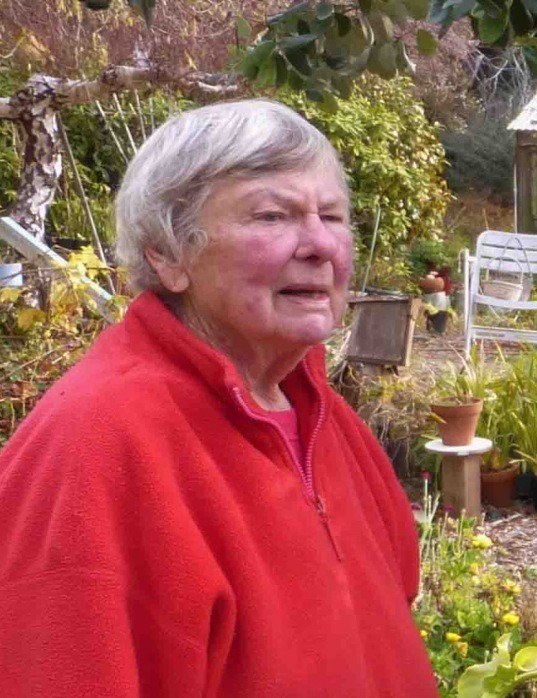 For all of her life Shirley McVoy was a self-sufficient do-it-yourself woman.  So it is fitting to begin this obituary with what she wrote herself in 2014:

“I was born May 2, 1926 to Leon and Helen McVoy of Grand Rapids Michigan, the youngest of three daughters.  I graduated from the University of Michigan in 1948 and became a Director of Girl Scouting with the Pueblo, Colorado Girl Scout Council.  In 1956 I received a scholarship to attend Boston University for graduate study in social work and in the same year was selected as an exchange camp counselor to Great Britain.

“During the 23 years in Girl Scouting, I was Director of councils in Colorado, Providence RI, Paramus NJ, Rockland NY, Jackson MI, and San Diego CA.

“Upon retirement in 1975 I bought, in partnership with Joanne Duff, the old Bacon/Collins place off Highway 1 between Gualala and Point Area.  Joanne and I have been friends since the 7th grade.  Though we lived separate lives since our University of Michigan days -- mine in Scouting and hers as a wife and mother with five children to raise -- we kept in touch and decided to re-join in our later years.

“Having expended my savings on land, I had little left for building and got a job as a part-time school bus driver, leaving me time to build my house and money to purchase material.  I was always handy with tools, and with “how to” books on construction, wiring, plumbing, etc., I built my own house.  I know it’s unusual for people, especially 50-year-old women, to build their own house.  But if you’re not a complete klutz and have the desire, it’s not only possible but fun.  As a matter of fact, I continued the fun as the years slipped by, building several structures -- garage, workshop, winery, studio, and cottage.

“In addition to building, I took on gardening.  Each year I cleared more land and planted more gardens.  In the late 1990s I started a ‘Garden Exchange’ group designed to visit one anothers’ garden and learn from one another.  This went on for several years thanks to the work and enthusiasm of many early members whose friendship I value.

“Besides the physical beauty of the coast, I appreciate the boundless energy of the people who live here.  Where else do people band together in so many community endeavors to provide such riches and resources for all: our Library, Arts Center, Humane Society, RCMS, and good old Pay & Take, to name a few.  I’ve been so fortunate in being a part of all this and I’m truly grateful.”

In her obituary Shirley neglected to mention she was also an artist.  Her winter days were filled with painting and other artistic endeavors simply for her own enjoyment.  In January 2019 an exhibit of her work was held at Gualala Arts’ Dolphin Gallery.  More about her art is available online at https://sites.google.com/view/shirleymcvoyart.

In 2017, at age 92, Shirley decided it was time to quit chopping wood for heat and moved back to Michigan.  As she wrote in a later note, “I came back to Michigan to be with my friend Joanne.  We wanted to spend the rest of our lives together.  We had been friends since the 7th grade.”  She lived comfortably at American House, a retirement home in Charlevoix, Michigan, near where Joanne had her home at the time.  After a gradual decline in health, Shirley died suddenly in her sleep on September 26.  She directed that there be no services.  Although she was not connected with any blood relatives, Shirley is survived and lovingly remembered by Joanne’s five children and their partners, five grandchildren, and two great-grandchildren.

To order memorial trees or send flowers to the family in memory of Shirley McVoy, please visit our flower store.
Send a Sympathy Card