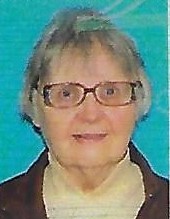 Shirley was born on June 2, 1935, in Hamilton, OH the daughter of Harry and Wynona (Shoemaker) Lawson.

She graduated from Eaton High School in Ohio 1953, then went on to earn her Nursing Degree from Middleton Hospital in 1956.

She had summered in Northern Michigan starting in 1963 and served as the nurse for the Charlevoix Camp for Boys from 1962-1969.   Upon retirement, her and her late husband Gordon moved to Bellaire permanently in 1995.

Shirley owned and operated a small business where she worked closely with Brownwood Acres.  She lived in the “Hinman House’ grand Victorian in Bellaire where she hosted yearly walk throughs.

She loved baking as well as her chocolate.

Shirley is survived by a daughter Susan Gordon (Jeff Martin) of Murray, KY, a granddaughter Paige Lavender of Indianapolis, IN, brother David (Sally) Lawson of Danville, IN, 2 nieces, Rebecca Lawson of Florence, SC, and Katrina (John) McKinney of Cincinnati, OH.

She was preceded in death by her husband Winston Gordon, her parents and was joined in death with her son Scott Gordon.

No services are planned at this time.  She will be interred in Ohio at a later date along with her family.

Memorial contributions may be made to the Bellaire Area Historical Society, P.O. Box 646, Bellaire, MI, 49615.

To order memorial trees or send flowers to the family in memory of Shirley Gordon, please visit our flower store.