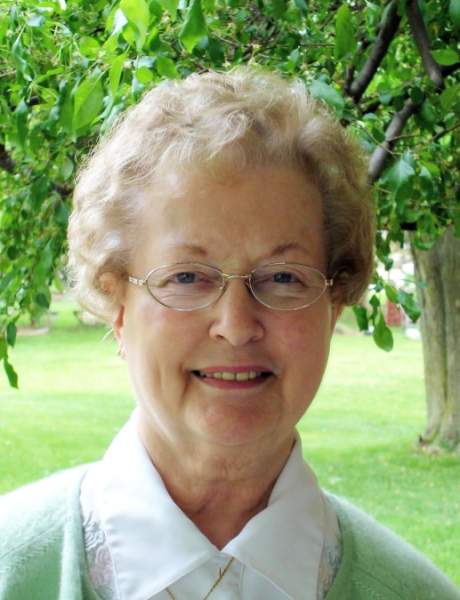 She met the love of her life while attending Guardian Angels Church Youth Group. Rose married Allen Pecar on September 10, 1949. They began their family in Detroit, later moving to Harper Woods while operating Pecar Electronics for many years.  Rose became a homemaker and cared for their ten children.  After Allen’s semi-retirement from Pecar’s in 1974, they moved to Mancelona.

Rose enjoyed canning and freezing vegetables from their large garden, and making maple syrup in spring.  She spent her evenings sewing and crocheting, and cooked countless meals for her family during holiday gatherings.  Her morning routine included breakfast at the table while watching the variety of birds at her window feeders.

Rose was a woman of deep faith. In 1974, she became of member of St. Anthony Catholic Church in Mancelona, where she worked as the parish secretary in the mid-1990s, and served on the Ladies’ Guild. She started the annual Living Rosary 35 years ago, and faithfully prayed her rosary, daily. Rose became a lector and remained active in her parish until her death.

Rose was pre-deceased by her husband of 66 years, Allen, in 2015; sons Edward and John; her sister, Irene Novak, and twin sister, Marie Margaret who died in infancy.  Left to cherish her memories are her children Margaret (Tony) Fallone, of Clinton Township, Thomas (Brenda Mulder) of Mancelona, Robert (Deb) of East Jordan, Mary Pecar, of Bellaire, Judy (Dave) Crockett of Manistee, Joanie (Tim) Moore, Theresa (Craig) Moore, and Kathleen (Andrew) Lightbody, all of Mancelona; Them (Chuong) Tran of Seattle; 15 grandchildren, 16 great-grandchildren and one great grandchild on the way.

Memorials may be made to her parish, St. Anthony Catholic Church of Mancelona, PO Box 677, Mancelona, Michigan, 49659.

Arrangements have been entrusted to the Mancelona Chapel of Mortensen Funeral Homes. Please sign her online guestbook www.mortensenfuneralhomes.com

To order memorial trees or send flowers to the family in memory of Rose Pecar, please visit our flower store.