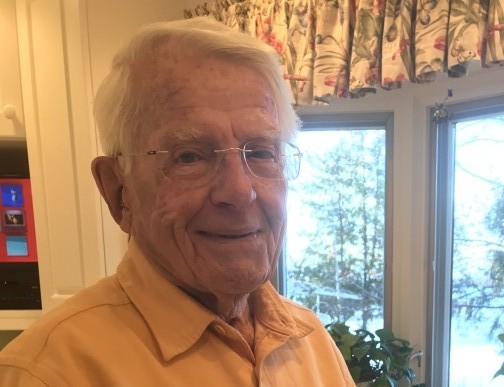 Bob was raised in Detroit and after high school graduation he joined the US Army Air Force.  He graduated from Michigan State University and went into the family business, Banner Linen Service Company of Detroit.  Upon selling the business and retiring, Bob and his family moved permanently to their Torch Lake residence.

Bob was very active in life.  He enjoyed playing tennis, racquetball, being outside tending his yard, watching wildlife, and listening to the birds.  He also enjoyed waterskiing and downhill skiing too even into his later years.  Bob could often be found fly fishing or sailing.  He loved his 1954 wooden Chris-Craft boat “The Mary E.” which he restored and drove often on Torch Lake.  For several decades Bob and Mary Ellen hosted the C to C Sunfish sailboat race from Clam River to Charlton’s.  In cool evening hours Bob enjoyed sitting in front of his fire place.

There were many organizations that Bob was passionate about.  He was a member of the Upper Torch Lake Association, the Torch Lake Protection Alliance, and the Oxbow Conservation and Fishing Club on the Ausable River.  He was also a member of the Central Lake Lions Club, the Central Lake Masonic Lodge, a past Master of the Detroit Masonic Lodge, the First Congregational Church of Central Lake, and the Snowflake Spiritualistic Church Camp.

Surviving Bob is his daughter Elizabeth Charlton.  Also surviving are many nieces, nephews, and great nieces and nephews too.  He was preceded in death by his wife Mary Ellen, his son Robert C Jr, sister Patricia Young, and brothers Bill and Dick Charlton.

To order memorial trees or send flowers to the family in memory of Robert "Bob" Charlton, please visit our flower store.