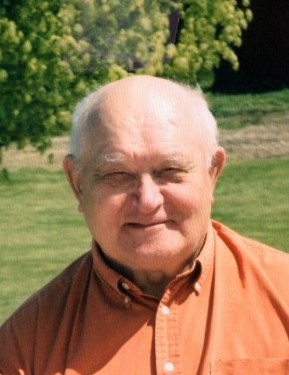 Robert B. Potter passed away on Thursday, March 5, 2020 as he approached his 94th birthday. Surrounded by his beloved wife Mazie and caring family, Bob achieved his goal of dying peacefully within his home on the farm.

Bob was born April 6, 1926 to Richard and Christine (Klooster) Potter in Charlevoix, Michigan and grew up in the Barnard area, attending the country school.  Raised in an environment of hard work, faith, and family, he thrived alongside his six siblings, Harry, Marion, Eldie, Jean, Betty, and Ted.  Together they labored on the farm, hand-sawing wood for heat and raising crops, animals, their own food, and a fair amount of shenanigans.

As a World War II veteran, he was called into service later in the war and spent time in Austria in the military police, working with soldiers from around the world as peace keepers in an international unit.  On a later family trip to Vienna, he reflected upon it as one of his most eye-opening, positive experiences which allowed a 19-year old rural young man to develop a world view of the value of all cultures and people.

In 1952, he married the love of his life, MaeZella Shaw and they recently celebrated their 68th anniversary. Together they raised six daughters with a healthy dose of Dutch work ethic, constant prayer, and a heap of farm chores.

Bob was a skilled softball pitcher with a wicked fastpitch that made catchers flinch. He relished spirited political discussions and solved world peace with his sons-in-law,  daughters, and friends.   He directed Marion Township as supervisor and was an assessor for local townships and the city of Charlevoix.  At his core, Bob was a farmer by choice. He balanced dairy farming, church activities, and attending his extended family’s thousands of athletic games, concerts, plays, birthday parties, graduations and weddings.  In retirement, he and Mazie traveled extensively with family and enjoyed far-flung corners of the world.  He’d eventually find a bench, strike up a conversation with locals,  and learn the area’s folklore.

The family expanded into a rousing bunch of angelic hooligans, totaling 70 in the immediate family (and still growing).  Bob was a strong patriarch for the family and our tuning fork.  We all listened to him for the right starting note and he encouraged each one to write our own song.  Even in his final days he would start any conversation asking about our well-being.  His clear notes of care will reverberate for us all.  He is loved and will be missed by many!

To order memorial trees or send flowers to the family in memory of Robert Potter, please visit our flower store.