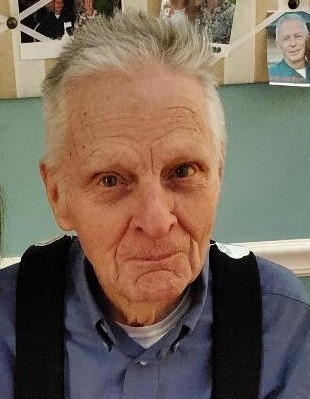 Born January 15, 1932 in Banks Township, Michigan, Richard was the eldest child of Raymond and Hazel (Arnold) Lamoreaux. Richard grew up on the family farm in the Eastport area attending Central Lake Public School.  As the family grew he spent his childhood days, carefree, with his three brothers and two sisters, having wild adventures, and making a lifetime of memories.  Hard-working and dependable kids, they helped to keep the family farm running smoothly, work ethics he took with him into his later life.  Richard was a kind soul, protective of his family into their adult years.  He possessed an uncanny sense of humor and when he laughed it was full body laugh.  He loved a good joke or successful prank.  On the last Friday of his life he “borrowed” a nurses PPE goggles, put them on and wheeled himself up and down the hallway at Boulder Park, smiling the entire time.  His patience, strong faith and inner strength made him easy to love.

After high school Richard spent two years farming on his Uncle Spencer’s farm with a group of good friends.  He then decided to join the United States Air Force. Before leaving for the Air Force, he met his first love, Beverly Joyce Murray, at school.  While he was serving our country, Joyce would write to him, keeping him informed about the local community.  It was during this time when they fell in love. Richard returned to Eastport and married Joyce November 20, 1953.  Upon completion of his time in the Air Force they made their home across the road from the family farm, soon starting their own family with sons, Dennis and Duane. Richard worked at Elk Rapids Hardware to support his family, allowing Joyce to be a stay at home mom.  While Richard was at work, on a hot July day in 1965, a car accident, took the lives of Joyce and Dennis and left Duane seriously injured.  Richard unwavering faith gave him solace during that difficult time.

Richard slowly moved on with his life, starting over in Minnesota where he began studying for the seminary. While living in Minnesota he met and married Karen (Chamberlain) Lamoreaux in 1967.

Richard, Karen and Duane moved to Phoenix, Arizona and Richard worked for Charm-Glo, a gas grill installation company, spending their winters in Phoenix they traveled back to Northern Michigan to spend summers.  To keep himself occupied he spent his time helping family members build their houses, haul hay, fix equipment and other useful projects.  He truly was a “Jack of all Trades.”

After several years life tested Richard’s strength again when he and Karen decided to part ways.

On May 1, 1976 Richard married Rita J. (Siebenthal) Lamoreaux, of Illinois, surrounded by great friends in Phoenix. Working together they remodeled a truck and camper for their travels between Arizona, Illinois and Michigan later making their permanent home in Eastport.  Richard spent his days tinkering in his shed or puttering around with his tractors.  As Alzheimer’s slowly started to become prevalent and he became confused Rita devoted herself to caring for him. Through many long, sleepless nights, forgetful days and unreasonable thoughts, she tried to keep their lives normal until there came the day when his own personal protection needed to be addressed and he became a resident of Boulder Park Terrace.

To order memorial trees or send flowers to the family in memory of Richard Lamoreaux, please visit our flower store.