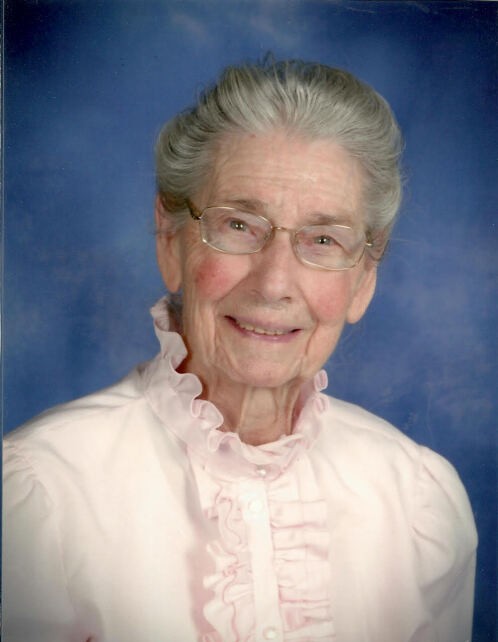 Rebecca Osborne, 99, formerly of Bellaire, Michigan, went to be with the Lord on Friday, August 13th. She was born February 18, 1922, in Klamath Falls, Oregon, to the late Caleb and Ida Mecham. After her mother died in 1923, Rebecca and her sister, Ruth, were raised by their Uncle Albert and Aunt Alice French in the sandhills of western Nebraska, near Lewellen.

Rebecca was a 1940 graduate of Garden County High School in Oshkosh, Nebraska. While attending Colorado Springs Bible School in Colorado, she met and fell in love with a U.S. Army soldier, Wayne Osborne, who at the time was stationed at Camp Hale, Colorado, during World War II. They were married on March 6, 1943, in Colorado Springs. After Wayne was discharged at the end of the war, they moved to Michigan, where they raised their three children, Kenneth, Chrystal, and Joyce.

Rebecca was a dedicated wife and mother, and besides her many homemaking tasks, she helped Wayne with farming, gardening, and his woodworking projects. After she had worked at Circuit Controls/ITT factory in Bellaire for a number of years, she also cleaned houses. She was well-known for her homemade bread.

Music was a big part of her life, including singing with her children, teaching them children’s choruses and the great hymns of the Church as they grew older. Many times were spent around the piano singing for family enjoyment or in preparation to sing in church.

Rebecca was a long-time Sunday School teacher at Bellaire Wesleyan Church. She and Wayne enjoyed traveling to church conventions, camp meetings, and revivals. She was a member of the Bible Methodist Church in Grawn.

She also enjoyed sewing and crocheting, and among her numerous sewing creations were quilts for each of her grandchildren and all of the greats. As long as they were able in their retirement years, Wayne and Rebecca used their gift of help by assisting friends and neighbors with chores, errands, and projects.

The family would like to extend a special thank you to Rebecca’s granddaughters Lori Fuller and Lisa Baxley and their families, who lovingly cared for her.

Funeral service will take place on Thursday, August 19th at 2pm at the Bible Methodist Church, 7640 US 31, Grawn, MI 49637. Visitation will be from 1pm until the time of services.

A second funeral service will be held on Friday, August 20th at 2pm at the Bellaire Chapel of Mortensen Funeral Homes, visitation from 1pm until the time of service. Interment will follow in Lakeview Cemetery, Bellaire.

Memories and condolences may be shared online at www.mortensenfuneralhomes.com.

To order memorial trees or send flowers to the family in memory of Rebecca Osborne, please visit our flower store.
Send a Sympathy Card