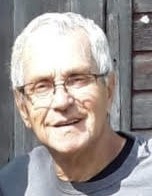 Ray loved to spend time with his family more than anything, especially his grandchildren and great-grandchildren.  He also enjoyed spending time outdoors, playing guitar & singing, working on tractors, and collecting antiques & clocks.  Ray proudly served in the United States Navy during the Vietnam War.

In lieu of flowers, memorial donations may be made to the American Cancer Society.

To order memorial trees or send flowers to the family in memory of Raymond Landers, please visit our flower store.