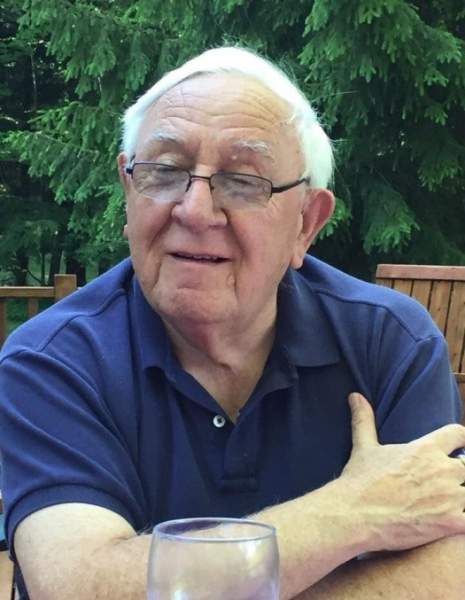 Patrick A. Quinn of Royal Oak, Michigan passed away peacefully, surrounded by his wife and family, on Friday May 28, 2021 at Charlevoix Hospital in Charlevoix, MI.  Born September 4, 1937 in Birr, County Offaly, Ireland, he was the son of the late Michael Patrick and Anne (Daly) Quinn.

Patrick attended the seminary at St. John’s College in Waterford, Ireland.  He was ordained June 18, 1961.  He served in Florida for 16 years including 10 years as a pastor in three parishes. In 1977 he received a dispensation from the priesthood.

On December 28, 1977 in Southgate, Michigan he married Kathryn (Katy) Ann Horton whom he worked with at Holy Name Parish.  They had 28 years together before her passing on May 5, 2005. After his move to Michigan, Patrick served as a drug-addiction counselor until his retirement.

On October 4, 2010 in Birmingham, Michigan he married Ann Maguire Walsh.  They had ten and a half years together.

In addition to his parents and first wife Katy, he is predeceased by sisters Maureen Quinn and Ryta (Matthew) O’Connor, by his half-brothers Fr. Robert “Bobby” and James (Kitty), by his brother Michael (Teresa), and his nephew Paul.

He is survived by many great-nieces and great-nephews from the Horton and Quinn families.

A memorial mass will be held on Friday July 9th at 10:00 AM at Christ Our Light Catholic Church in Troy, Michigan with visitation from 9:30 AM until the time of service. Following a luncheon at the church, a private burial will be at Our Lady of Hope in Riverview, Michigan.

In lieu of flowers, the family suggests that donations in Patrick’s name be made to the American Cancer Society at: https://www.cancer.org/involved/donate/memorial-giving.html

To order memorial trees or send flowers to the family in memory of Patrick Quinn, please visit our flower store.