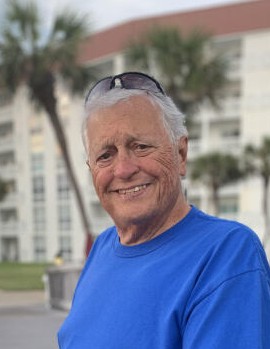 Michael John Shagena, 82, of Bellaire, passed away peacefully on Thursday, September 9, 2021.  He was born on December 11, 1938 in Detroit, MI, the son of Milo and Gertrude (Broderick) Shagena.

Michael proudly served in the United States Navy during the Vietnam War.  His time in the service was very important to him, and he made sure to stop at the local American Legion Post everywhere he went.  He was a lifetime member of the American Legion as well as the Elks Club.

He worked several years for Volkswagen, and then moved on to work as a purchasing director at TRW, which manufactured airbags and safety harnesses.  In his spare time, Michael enjoyed golfing, playing softball, hunting, fishing, and watching sports, especially his Michigan State Spartans and sometimes the Detroit Lions.  He will be deeply missed by many friends, near and far.

A celebration of Michael’s life will be held on Saturday, September 25, 2021 in the Bellaire Ball Room at the Lakeview Hotel at Shanty Creek Resort, 5780 Shanty Creek Rd, Bellaire, MI 49615.  Visitation will take place from 10:00 am – 12:00 noon with the service starting immediately after.

In lieu of flowers, memorial donations may be made to Leader Dogs for the Blind, 1039 Rochester Rd., Rochester, MI 48307.

Arrangements are in the care of the Bellaire Chapel of Mortensen Funeral Homes.

To order memorial trees or send flowers to the family in memory of Michael Shagena, please visit our flower store.
Send a Sympathy Card