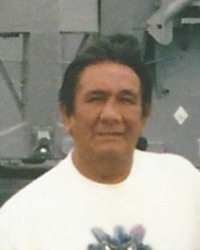 Mike was raised in Charlevoix until he was ten years old, and then moved to Grand Rapids to be with his mother.  When he was 19, he returned home to Charlevoix and he has called it home ever since.  He was an extremely hard-working man who wore many hats over the years; he was a stone mason, a tree cutter, a fisherman, and he also worked at East Jordan Ironworks and Harbor Industries.  He was a member at Greensky Hill United Methodist Church, and was always available to lend a helping hand whenever it was needed.  Mike also played a key role with in gaining fishing rights for Native Americans in Michigan, as well as with TMAG to fight for the rights of tribal members.

Mike loved his family, especially when he was able to spend time outside with his family and friends.  He enjoyed mushroom hunting, having picnics, taking them to the beach, and even simply taking a leisurely drive with his elderly family members.  In his younger years, he also enjoyed playing pool and fishing for whatever was biting.  More recently, he enjoyed flying kites and putting puzzles together.

He was preceded in death by his parents; his sister, Harriet; and his brother, Curtis.

A memorial service will be held in the Spring of 2023 at Greensky Hill United Methodist Church.  Details will be announced as they are made available.  His sacred fire will be going out on Tuesday morning, December 6.

In lieu of flowers, memorial contributions may be made to Greensky Hill United Methodist Church.

To order memorial trees or send flowers to the family in memory of Michael Mitchell, please visit our flower store.