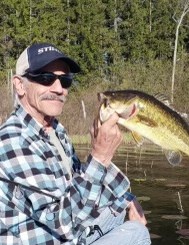 Michael McCreary, 66 of Ellsworth, passed away January 26, 2021 at home surrounded by his loving family.  He was born July 8, 1954 in Warren, the son of Bernard and Lynne (Dreyer) McCreary and grew up in Traverse City

Mike was a hardworking man and always ready to lend a hand.  He began his working career in the oil fields at 18 years old as a foreman.  He owned Mike’s Auto Care for 10 years in Atwood, worked at Klooster’s John Deere, and did many other mechanical jobs as well.  Mike never met a job he couldn’t do and never mastered “NO”.  He could often be found tinkering around the garage or working outside on his lawn, which was always the best lawn around town.  He enjoyed all types of fishing, loved animals, especially birds, and was a fireworks king!

He never met a stranger and every kid in town called him “dad”.  “Failure is not an option”, “No such thing as can’t”, and “Two wrongs don’t make a right” were his favorite sayings and everyone knew it.

A celebration of life will be held this summer.

Arrangements have been handled by the Ellsworth Chapel of Mortensen Funeral Homes. Please sign his online guestbook www.mortensenfuneralhomes.com.

To order memorial trees or send flowers to the family in memory of Michael McCreary, please visit our flower store.