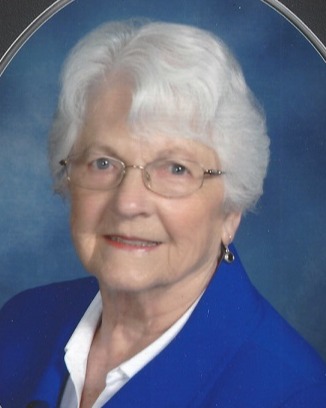 Mary Ellen McManamon, 96, of Charlevoix, passed away on Monday, October 17, 2022 at American House in Charlevoix.  She was born on August 24, 1926 in Detroit, MI, the daughter of Harold and Marie (Measel) Schenavar.

Mary graduated from Northwestern High School in Detroit, MI.  She married her high school sweetheart, Peter McManamon, on October 19, 1946, when he returned from duty in the Air Force.  They raised their family in suburban Detroit and retired to Florida, eventually making Charlevoix their home in 2001.  Mary volunteered much of her time at Hospice of Florida, Charlevoix Food Pantry, The Rainbow Shoppe as well as baking and cooking for luncheons at St. Mary’s.  In her free time, she enjoyed golfing, playing bridge, and was well known for her delicious pies.

She was preceded in death by her loving husband, Peter McManamon; her parents; three brothers, Harold Schenavar, John Schenavar, and Stanley Schenavar; and her sister, Susanne Bloch.

In lieu of flowers, memorial contributions may be made to Hospice of Michigan, 989 Spaulding SE, Ada, MI 49301.

To order memorial trees or send flowers to the family in memory of Mary Ellen McManamon, please visit our flower store.