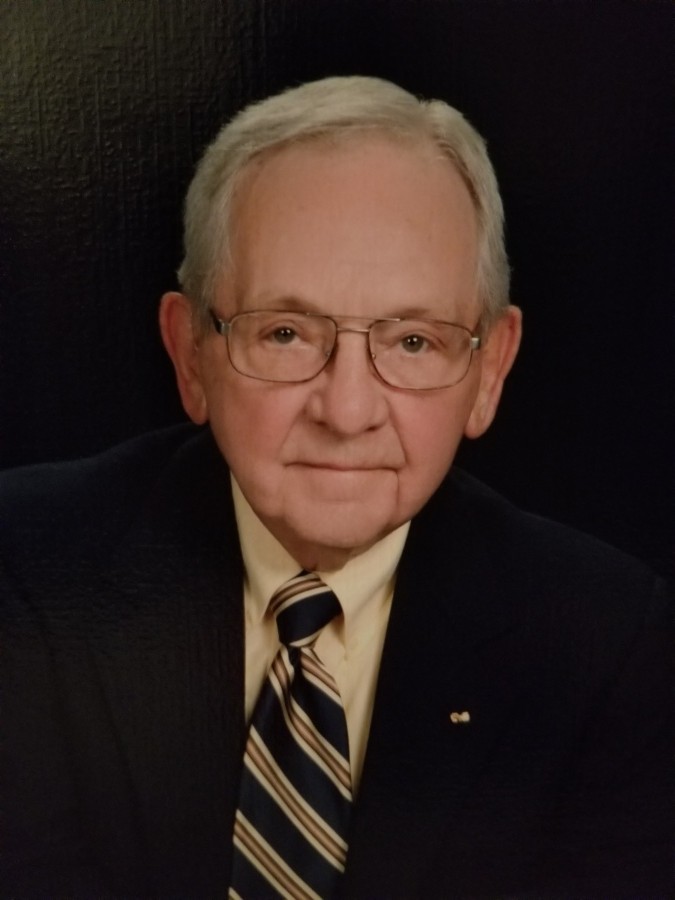 TRAVERSE CITY – Marvin Burdette Wolf of Traverse City passed on to his next chapter in Life Eternal on December 30, 2019.  In the end, Marv was surrounded by his family, friends and a truly great extended family at Bay Ridge. The product of a devout line of German-American Midwest pioneers, the work of a generation shaped by great forces of change, and the discipline for learning that never, ever ceased, Marvin B. Wolf, M.D. brought a great sense of readiness and resolve to nearly everything he did, and almost everyone he served.

Marv was born in Hudson, Michigan on November 17, 1924, to Charles and Matilda Wolf.  He learned to carve wooden model airplanes while lying in traction, mending from a broken back.  He helped put dinner on the table for his sisters during the Great Depression with a single fire shotgun.  He learned what character meant at the knee of a veterinarian and minister father and the kitchen table of a home nurse mother and Willow Run bomber plant tool crib manager.  These and other influences built Marv into a fine surgeon, a true servant leader, a very good man, and a very interesting character. We remember his unbridled commitment to serving the house call needs of patients, returning with pay in the form of baked goods, hams, chickens, fresh produce, car parts and a dog or two. We also remember his boondocker boots and marksmanship medals received from Marine Basic Training in Camp Lejeune, indicators that he had the same basic capabilities as his grandfather, a Civil War Sharpshooter for the Union.

He graduated from the University of Michigan Medical School in 1948, the last year in which Michigan celebrated a National Championship in football.  From there, he completed post-grad medical training in Denver, Saginaw, Ann Arbor and the Navy. He settled professionally in Adrian, on the medical staff of Bixby Medical Center. He met our Mom, Kathleen Sloan of Bowling Green, Ohio, soon to become Katie Wolf, crossing in the hallways at U of M Hospital.  She was a nurse, with a particular attitude. He was a young Doctor, headed for Denver. They dated for about a month, maybe less … actually a couple of months. They were married for 61+ years. We think that is remarkable, in so many ways.

Marv was complex.  He was an outgoing storyteller and a quiet, private man of abiding faith.  He became a kind feature in Katie’s tribe of Sloans and a supporting role player in the vast family domains of his mother and father.  We once went to a family reunion in West Unity, Ohio to share Potato Salad with 650 of our closest relatives. Every one of those people had great expectations for Marv – they revered his parents and the stuff they were made of. He learned how to hold us close and let us go, all the while knowing that we would struggle and strive along  our journeys. He was humble and he was proud. He was moderate and he was obsessed. He was patient and he was a man who acted with great urgency about most things in life. He was very hard on the details and he loved the broader landscape, the long game, the bigger picture. He had some rough edges and the soft touch of a healer, a teacher, a helper.  He knew first-hand, the nature of the sacred and profane. He practiced the art and science of medicine in an era of exploratory and improvised care.

We learned anatomy from Marv in the process of field dressing game birds and deer.  Every function of kidneys and gizzards would be explained in this process. We learned the joy of sports from Marv, along with the art of après ski, après hunt, and après golf.  We learned how to treat others from Marv as he actively engaged servers, patients, colleagues, friends, and those people who would never be his friends. We learned our very best cuss words from Marv, starting with the five-word phrase he attached to our terrible coal furnace on Park Street.  Marv gave us much. The lessons of long marriage, the lessons of curiosity and courage. The lessons of aiming small. The lessons of stepping-up to opportunity and challenge with persistence. The lessons of Amazing Grace. Blunt and honest. Tough but fair - most of the time. Hard work, hard play.  Music, as loud as need be. Or louder. The importance of history. The love of dogs and men. The power of generosity, especially with 12 extra copies of a piece of music, or a road map, or a trail map, or a list of golf courses, or a menu from a Chico Springs, Montana tavern, or the wine list from a bistro in Keeneland, Kentucky. Never know when you might need extra copies.  Or an extra pair of boots. Or yet another map of the Big Burn at Snowmass. Marv thrived on the essence of friendship, along with the effort required to nurture and preserve friendships. He found the capacity to forgive, to make way for the awesome wonders of our days, and in more ways than we can ever really know, he shared with us the capacity to heal ourselves.

Marv leaves this mortal world willingly to meet his maker. Like his father, he was truly ready, and fully expectant.  He leaves behind three sons and their families, Michael and Gloria, Daniel and Julie, Timothy and Michele, along with his grandchildren, Charlie and Nicole,  Jared and Andrea Wolf, Megan and Benjamin Jones and Ian and Alison Wolf - five great-grandchildren, Trey, Evarett, Isely and Welles, and Baby Eli. He also leaves behind his golf buddies, the next generation of sons and daughters of dearly-departed friends, his ski buddies, and with the deepest, greatest appreciation – his extended family and friends at Bay Ridge.

A private family service will take place on January 04, 2020 in Central Lake, with Dr. Gary Hogue.  There, Marv and Katie will share their first toast together in a decade. An open Celebration of Life Service will take place on May 02, 2020 at the Congregational Church of Traverse City, with Dr. Hogue officiating.  Visitation at 10:30am, with services at 11:00 am. Luncheon and invited roasting to follow. In lieu of nice flowers or fancy wine, memorial contributions may be directed to the Munson Healthcare Foundation.

The family is being served by Mortenson Funeral Homes in Central Lake.  Please sign his online guestbook at www.mortensenfuneralhomes.com

To order memorial trees or send flowers to the family in memory of Marvin Wolf MD, please visit our flower store.
Send a Sympathy Card