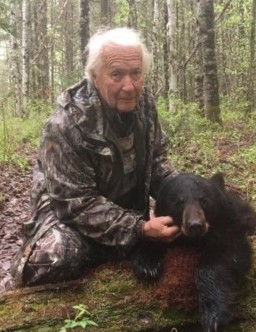 Marvin Russell Smith, 80, of Bellaire passed away on December 24, 2020 following a brief illness.  He was born on September 23, 1940 in Detroit, MI the son of Marvin and Sally (Filipiak) Smith.

Marvin graduated from Bellaire High School in 1959, and shortly thereafter moved downstate to join the work force.  Over the course of his working years, he owned and operated several successful tool and die businesses.  He married his sweetheart, Dyann Harbaugh, and they raised their children together in Roseville while spending summers in Bellaire.  When Marvin retired, he moved back to his home on Lake Bellaire permanently.

Marvin loved any time spent outdoors, but his greatest joy was hunting; though always a deer hunter on his property in Bellaire, he also hunted big game in Africa as well as around the United States.  He had recently taken a liking to bear hunting and was just beginning to delve into the world of wolf hunting.  Marvin was a hard-working man who loved to help people whenever he could.  He was a Board Member on the Bellaire Area Seniors for many years, and he also volunteered a lot of his time to help the Bellaire High School soccer team in any way he could.

He was preceded in death by his parents, and his wife, Dyann.

The family will hold a private memorial at a later date.

To order memorial trees or send flowers to the family in memory of Marvin Smith, please visit our flower store.