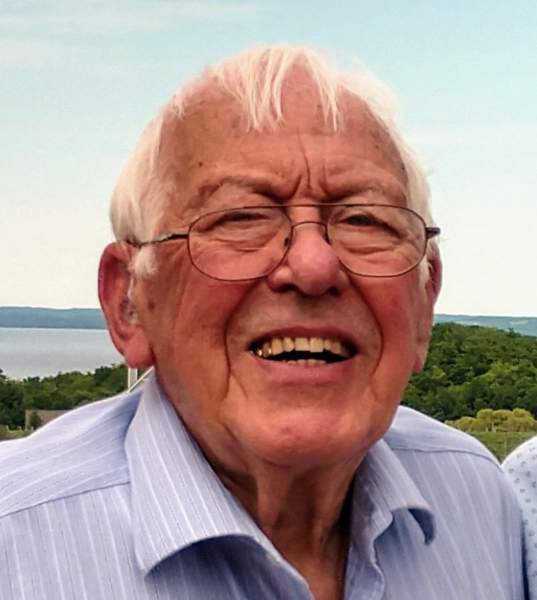 Marvin grew up in the Upper Peninsula before moving downstate to Saline in 1940.  He played tennis for Saline High and, like his father, developed a passion for flying.  He enlisted in the Naval Air Force when he completed high school.  After World War II, Marvin attended Purdue University where he received a Bachelor of Science degree in Aeronautic Engineering.   Marvin then spent many years in industrial advertising. Towards the end of his career, he became a publisher for Wards Auto World.  In 1971, Marvin married Berneil and they began splitting their time between Rochester and northern Michigan until Marvin’s retirement in 1988. Marvin enjoyed boating and fishing on lovely Torch Lake.  He and Berneil both loved golfed and played regularly with friends known as the Guys and Dolls.  Once retired, they moved to Bellaire full time and became active members of  Church in the Hills.  After Berneil’s passing, Marvin moved to the Village of Bay Ridge and also became a member of the Presbyterian Church of Traverse City.  As a resident of Bay Ridge, Marvin kept active by volunteering at the community store, organizing musical entertainment, managing movie night, calling bingo and assisted other residents in getting to appointments.  Marvin kept a very busy calendar and truly enjoyed helping enrich the lives of others.

Surviving him in death are his two sons; Ronald Olson of Delray Beach, FL and Bruce (Patricia) Olson of Marquette, MI.  He is also survived by his granddaughter Kristin Olson Krueger of San Francisco, CA.

Proceeding him in death are his parents Rolph and Anna (Englund) Olson, and wife Berneil.

A memorial service will be held in early summer to celebrate Marvin’s life.

Memorial Contributions in Marvin’s honor can made to The Foundation for Peripheral Neuropathy, 485 E Half Day Rd Ste 350, Buffalo Grove, IL 60089-8808.

Arrangements are in the care of the Bellaire Chapel of Mortensen Funeral Homes.

To order memorial trees or send flowers to the family in memory of Marvin Edward Olson, please visit our flower store.