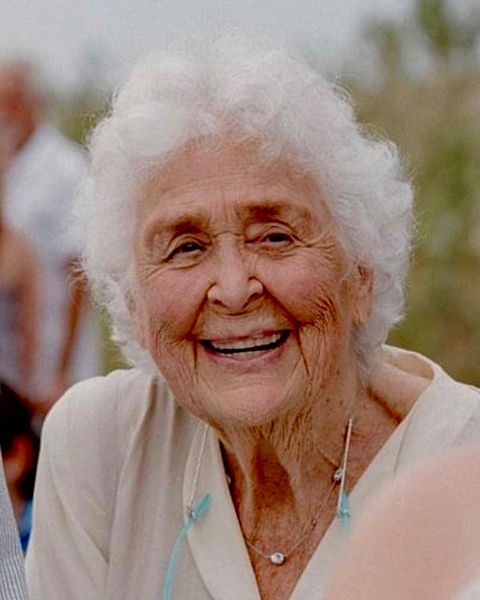 Marilyn Lee Reed passed away peacefully, surrounded by her family on September 27, 2022.  She was 94 years old.

Marilyn L. Reed was born to Margaret Wallace and William Wallace on January 7th, 1928, in Columbus, Ohio.  She went on to live a long and traveled life, moving several times before finding her home with her husband Joe on Beaver Island, Michigan.

Marilyn attended The Ohio State University as a Fine Arts student.  While in college she was a member  of the Delta Gamma Sorority and was a model for Rikes Department Store in Dayton, Ohio.  While working in Dayton she was courted by a grade school friend Joseph D. Reed.  After dating several years, they married on August 5th, 1950.  They went on to have four children, enjoying a long and storied marriage spanning 71 years.  Marilyn and Joe lived in Chicago before moving to their beloved Beaver Island.

Family and friends were always most important to Marilyn. She held close not only her children but the many relatives near and far, especially her sister Joan Merkle (deceased), brother-in-law and dear friend Bill Merkle, and her many nieces and nephews.  Her island friends and neighbors stopped by frequently bringing food, enjoying Happy Hour on the deck, or just checking on her wellbeing when she was alone.

Always a volunteer, Marilyn combined her love of nature, botany and birding, working at The Field Museum and The Botanical Gardens in Chicago, Illinois. Most recently she volunteered her time with the Little Traverse Conservancy, the Beaver Island Advisory Committee, and The Charlevoix County Community Foundation.  She loved to take her Grandchildren on hikes with CMU Biological Station on Beaver Island and could also be found riding her bike along the Kings Highway or tromping through the fields and bogs with her island friends looking for wildflowers.  An avid reader, she loved the Beaver Island District Library and was proud to keep up with current National and World events.

Marilyn was preceded in death by her Husband, Joseph Reed.  She is survived by her oldest son Bill Reed (Suzanne), son Joseph Reed, daughter Shaun Markey, and daughter Jenny Strang (Peter).  Mamie is also survived by her loving Grandchildren, Hannah Dingman (Kyle), Sam Reed (Amanda), Michael Reed (Ashley), Will Markey (Jen), Riley Markey (Elizabeth), Mitch Strang (Malori), Maddy Gardner (Chris), and Olivia Gipson (Jon).  There are multiple Great Grandchildren all of whom she was able to hold and whisper to quietly in only a language they understood.

One of Marilyn’s many daily thoughts, “The only thing you can take to Heaven with you is what you have given away”.

A Celebration of Joe and Marilyn’s life will be held on Beaver Island, Summer 2023.

To order memorial trees or send flowers to the family in memory of Marilyn Reed, please visit our flower store.