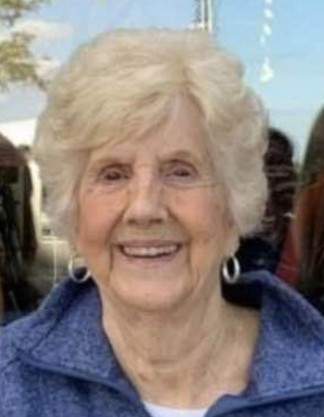 On Saturday, January 1, 2022, Margaret Harriet Drost went to be with the Lord at the full age of 85.

Born on May 10, 1936, Margaret was the daughter of Bill and Iva Archer. She spent her childhood in East Jordan, Michigan, with her seven brothers and sisters—Marvin, Laverne, Virginia, Frank, Bob, Bill, and Marge—and in her senior year of high school, she met Eugene Drost of Charlevoix. They knew then that it was love. The two were married on May 5th 1956 and settled down in Charlevoix, Michigan. Together, they were blessed with four sons: Gene, Chris, Bob, and Deano.

Two things were of the utmost important to Margaret: her faith and her family. She instilled these values into her children from a young age, creating time for family dinners over home-cooked meals and ensuring everyone made it to church as often as the doors were open. She was dedicated to reading God’s Word and spent countless hours lifting her family up to the Lord in prayer.

As her children grew, she began to pour into the lives of other children in her community by first becoming a playground supervisor at the Charlevoix Elementary School, later working in the lunchroom there, and eventually spending her time in the office. She also volunteered at the Charlevoix Rainbow Resale Shoppe, enjoying her interactions with the many people she met.

Margaret is now reunited with some of the family who were so important to her—her parents, her siblings, her husband Eugene, and her grandson Tanner. But she has left behind those who will miss her most—her four sons and their wives, Gene, Chris and Danya, Bob and Diane, and Deano and Julia; her nine grandchildren and twelve great-grandchildren; and many other beloved friends and family members.

Funeral services will be held on Friday, January 7th at the Center Point Assembly of God, 5291 N M-66 Highway Charlevoix, Michigan, 49720, at 3 pm.  Visitation will be from 1pm until the time of service.

To order memorial trees or send flowers to the family in memory of Margaret Drost, please visit our flower store.