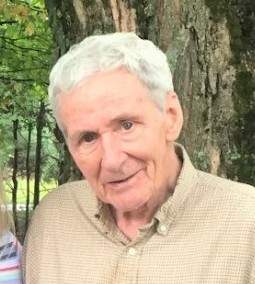 Macklyn (Mac) Roger Smith, 79 of Bellaire died July 14, 2022 at the Charlevoix Area Hospital. He was born July 4, 1943 the son of Morley and Esther (Montgomery) Smith. In 1961, he graduated Salutatorian from Bellaire High School. He was both a scholar and athlete.
Mac was a lover of music, especially live music, and a prolific songwriter. When he lived in Alabama, he hired a young band named Alabama (before they were famous). He was an avid sports fan and cheered for all the Detroit teams and the Atlanta Braves. In the summer, he could be found all around Northern Michigan attending the local festivals.
He made a career of Industrial Engineering, earning a good reputation with several engineering firms. Mac lived in many states over the years including Alabama, Georgia, Illinois, Kentucky, New Jersey, New Hampshire, Texas, Vermont and Washington, before settling back down in Bellaire to enjoy the rest of his days. He grew up attending the Bellaire Community United Methodist Church and he had many good times with this brother Gary when they were members of the Mancelona Moose Lodge.
Surviving Macklyn are his children Brenda (Bruce) Graham of Texas, Douglas Smith of Michigan, Andrew Smith of Texas, the mother of his children Bonnie Smith of Bellaire, brothers Dean (Leslie) Smith of Georgia, Gary (Sami) Smith of Bellaire, sister Gayla Newman of Arizona, grandchildren Haley Smith and Jack Graham along with numerous nieces and nephews. He was preceded in death by his parents.
The family would like to thank the Eastport Village Care Home for their outstanding care of Mac these last few months, and to the staff at Charlevoix hospital for their care and grace in his final days.
Funeral services will be held Friday, July 22, at 11:00 am at the Bellaire Chapel of Mortensen Funeral Homes, with pastor Tom Ash officiating. Interment will follow in Eldred Cemetery, Kearney Township. Family will receive friends Thursday, July 21, from 5-7 pm, also at the funeral home. Memorial contributions can be given to the Alzheimer's Association, in honor of his mother.
Join us on ZOOM:

To order memorial trees or send flowers to the family in memory of Macklyn Smith, please visit our flower store.