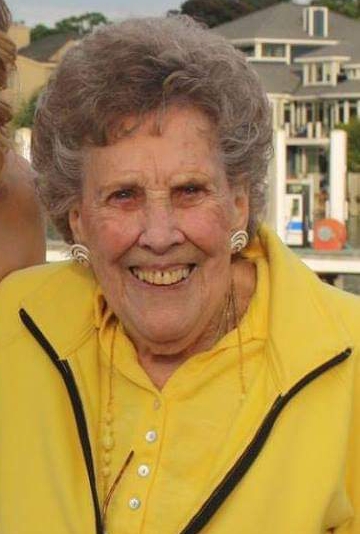 Lula Delores Baldwin died peacefully on June 22, 2019, at home, after a short battle with lung cancer.  She was surrounded by her loving family. She is survived by;  Beth (Timothy) Shields of Fort Wayne IN., Catherine (Keith) Mohan of Charlevoix, Mi., George E. (Penni) Baldwin, Jr. of Maggie Valley, NC and Laura (Scott) Stebe, of Charlevoix. Another child, Donald Baldwin, died in infancy. She was preceded in death by her husband of 59 years, George E. Baldwin in 2008.

Lula was born on her Aunt Lula Young’s farm, in Bloomfield Township, Michigan on September 17, 1924. Her parents were Frederic C. Wilkins and Bertha (Bachelor) Wilkins of Orchard Lake, Mi. She had seven siblings, three who lived to adulthood and preceded her in death, Dorwin T. Wilkins, Wilfred W. Wilkins, and Elleanore Van Meter.

She was raised in Orchard Lake, MI., and worked alongside her parents and family in their restaurant and bar, Wilkins Restaurant and Cocktail Lounge, which operated from 1921 to 1970. She graduated from Pontiac High School and attended Eastern Michigan University. She was trained to be a WASP (Women’s Auxiliary Service Pilot), which transported planes across the country during World War II. She continued to fly recreationally after the program ceased.

On February 19, 1949 she married George E. Baldwin at St. Hugo of the Hills Church in Bloomfield Hills, MI. They started their family and made their home in Tawas City, MI., before moving to Escanaba in 1959, to build an oil refinery. Ultimately, they became pioneers in the developing cable television industry, which brought them to Charlevoix in 1966.  They established Lake Charlevoix Cable TV which included Charlevoix, East Jordan, Boyne City, and Gaylord. Upon selling that business in 1981 they bought and ran the cable system in Grayling until their retirement in 1985.

Retirement allowed them increased opportunities to enjoy lifelong pleasures of boating, hunting, traveling and exploring in their fifth-wheel travel trailer. All her life, Lue loved going to the family cabin near Lewiston, fondly called “Camp”. She and George also spent winters on Nettles Island in Jensen Beach, Florida. Their travels included going to Nova Scotia, Alaska, and Australia.

She is survived by many nieces and nephews and extended family.

Her legacy is one of unconditional love, living by example, being charitable, and above all else putting family and faith first.

Per her request, a private service will be held at a later date.

Memorial contributions can be made in her honor to:

Or to Mayo Clinic (which received her body for medical research) in memory of Lula Baldwin for support of Kidney Cancer Research in Urology.  200 First St, SW, Rochester, MN 55405

To order memorial trees or send flowers to the family in memory of Lula Baldwin, please visit our flower store.