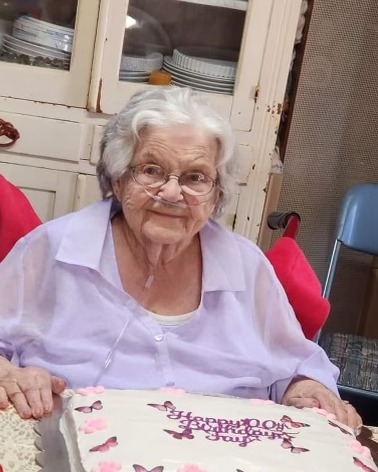 Fay was born on October 30, 1922 at home on Chemical Hill in East Jordan, to Ray Barrick and Suzie Sabin Barrick.  At the age of 3, Fay moved with her parents to her grandparent’s farm on Old State Rd in Echo Township, Antrim County.

She attended Finkton county school through 8th grade.  To attend high school Fay walked 3 miles to Chestonia, through all kinds of weather to catch the school bus then 3miles back home in the evening.  Fay did this for 4 years, becoming a proud graduate of East Jordan High School, class of 1940.

On August 9, 1941 Fay married her long time childhood neighbor and the love of her life Asa Beal.  The couple moved to the farm Asa had bought in 1938, just a mile from where Fay had grown up.  They were married for 54 years until Asa’s death in 1995.

Fay was always a hard worker.  As a young teenage girl she picked beans, sweet corn, apples, and cherries. As a young adult she worked at East Jordan Iron Works and at Foster Boats in Charlevoix during World War II.  Following the end of the war, besides farming, Fay also worked at the canning companies in Central Lake and East Jordan.  In 1954 she hired in at Mr. Clemens Metal Products, later Dura Corporation, where she worked for 30 years, retiring in 1984.

To order memorial trees or send flowers to the family in memory of Luella Fay Beal, please visit our flower store.