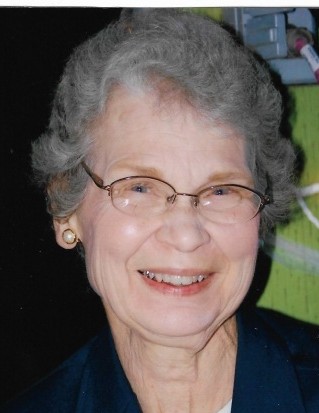 Lois Anita Eaton, 88, of Kewadin, MI, died peacefully with her daughters by her side on September 22, 2020.  She was in the loving care of Heartland Hospice and Samaritas Senior Living Center, Williamsburg, MI. Lois was born on February 24, 1932 in South Bend, IN, the daughter of Lloyd and Elsie (Gerdes) McCormick.

In High School, Lois was involved in many activities including Band (1st chair Flute), Orchestra, Student Council, Latin Club and was even crowned “Melody Queen” her Senior year.

Lois attended Michigan State University, was a member of the Alpha Xi Delta sorority and played in the band.  She graduated from Penn State with a BA Degree in 1953.

The couple made the commitment to serve in the Air Force in 1953.  Lois moved their family over 20 times throughout the years. As an Officer’s wife, she cared for new families on base, was involved in the Naval War College’s social engagements, and duties as the wife of a Wing Commander at Elmendorf AFB. The year that her husband was deployed to Vietnam, the family remained in Arizona where Lois went back to college to study library science.

Between moves and summer vacations, coming home to MI to visit family was a top priority. After Fred’s retirement from the military, they spent many years in Fife Lake, MI refurbishing their 100 year old home. Lois was elected as a trustee for Union Township.  She and Fred took on the restoration of the 1880’s school house where the township meetings were held. Through the township efforts, the school is now on the National Historical Registry.  When the couple fully retired, they moved to the family lake property on Grand Traverse Bay.

Lois was a woman of Christian faith. She had a passion for history, music, and antiques.  She was extremely skilled in refinishing furniture, upholstering, needlepoint, quilting, and sewing. She was a member of the Elk Rapids Garden Club as well as The Elk Rapids Quilting Group. She also loved reading and spending time with her book club ladies.

Interment will take place next to her husband in Lakeview Cemetery, Eastport, Torch Lake Twp. MI

To order memorial trees or send flowers to the family in memory of Lois Eaton, please visit our flower store.