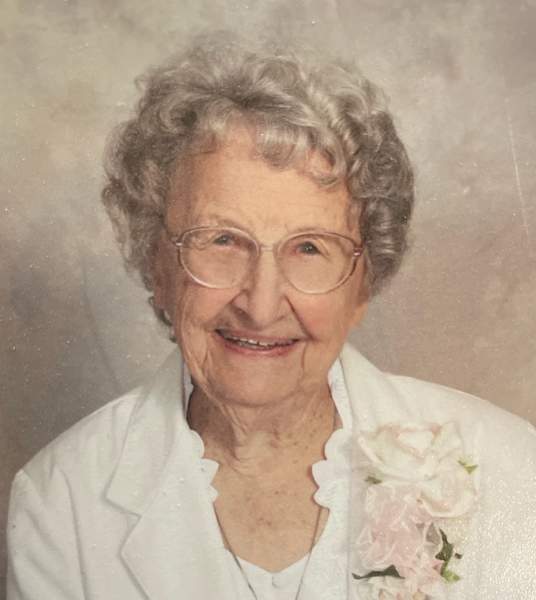 Lillian E. Harmon (Knutsen), 105, of Bellaire, went to be with her Lord and Savior on May 31, 2022 at Meadow Brook Medical Care Facility.

Lillian was born on January 29, 1917, in Coopersville, MI, the daughter of Arie and Nella (Eding) DeGroot.

She was a very faithful Christian woman with strong family values.  As a young woman, she attended Moody Bible College along with her late husband Lyle Harmon.   Following that, she became a preacher’s wife and helped him spread the word for many years.

A handy woman, she was known as a “jack of all trades” and could do just about anything.   She was a talented carpenter and built several houses.  She loved to flower garden, bake, fish, and sew.  She was very artistic and known for her “chalk” drawings.

Visitation will be from 10:00 a.m. until the time of services at church.

Graveside services will also take place on Friday at 3:30 p.m. at Fairview Cemetery, Custer Township, where she will be laid to rest along side her late husband Lyle Harmon.

Arrangements are under the direction of the Bellaire Chapel of Mortensen Funeral Homes.

To order memorial trees or send flowers to the family in memory of Lillian E. Harmon (Knutsen), please visit our flower store.