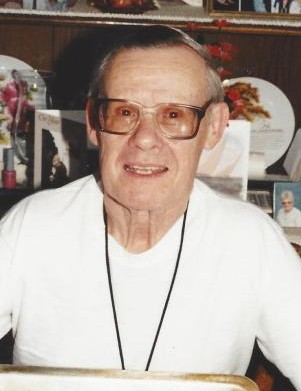 Bunk was born to T. Miles and Ruth (Crain) Russell on May 3, 1928, in Charlevoix, MI.  He attended and graduated from Charlevoix Public Schools.

Ken was drafted near the end of WWII, he served in Japan until the war ended.  Because he did not serve a whole year, he was drafted a second time when the Korean War started.  At that time, he was stationed in Germany.  After being sent home, he was in the Army Reserves for six years.

Once home, Ken attended Mechanic School in Chicago.  He was an Auto Mechanic in Charlevoix until his retirement.

On June 8, 1956 he married Barbara Gennett, and they were together for 50 years.

Bunk loved to travel by car, snowmobile, and motorcycle.  He even made it to every state in the United States, and through Canada.  Later in life he took his wife to Europe, wanting to show her where he had been during the Korean War.

He was preceded in death by his wife Barbara, his parents T. Miles and Ruth, a sister Juanita, and a brother Walter.

The family would like to thank everyone at Hiland Cottage for their exceptional care of Ken.

Arrangements have been handled by the Winchester Chapel of Mortensen Funeral Homes. Sign his online guestbook www.mortensenfuneralhomes.com

To order memorial trees or send flowers to the family in memory of Kenneth Russell, please visit our flower store.
Send a Sympathy Card