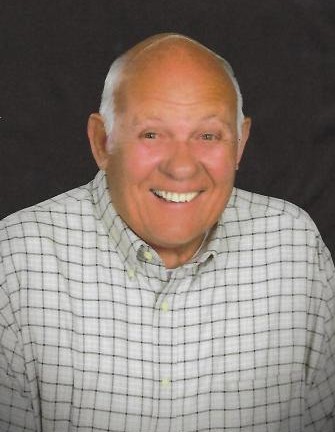 Surrounded by loved ones, Keith F, Hubbell of Williamsburg, Michigan passed away peacefully on February 7, 2020 at the Villages of Florida. Keith was born March 6, 1934 to Ivan and Evelyn Hubbell in Acme, Michigan. He attended Elk Rapids High school, where he met and married his High school sweetheart, Rosanne (Butler), in 1953. Together, they shared sixty-five years of endearing marriage. He is survived by their five children Penny, Kirk (Debbie), Jennifer (Greg) Bratschi, Chris (Janet), and Paul (Susan) Hubbell. He is also survived by his two sisters, Joyce Hoopfer, Margaret Grelick and brother Gary (Edna) Hubbell.  Keith’s greatest joy in life was his family. He was the proud “Bompa” of twelve grandchildren, twenty-three great grandchildren and the loving uncle to many nieces and nephews.

After marrying Rosanne, Keith was employed at Chef Pierre as a plant manager. He later became a partner with Wanigan Corporation where he built custom homes in the Elk Rapids area. Raised on a cherry farm, Keith's lifelong love for farming was instilled at a very young age. Keith purchased his first cherry orchard in the 1960’s and established his business of Orchard View
Farms. While working for Wanigan Corporation, Keith spent his spare time farming until he was able to grow his business into a full time career.  In addition to his career, Keith was an active member of the Elk Rapids Rotary club for sixty-two years, where he maintained perfect attendance and received the Paul Harris Fellowship award.

Keith was known for his infectious smile and his heart of gold.  Those who knew him best know nothing inspired that contagious grin more than his family and farming. A cherished family man, a beloved husband, and a passionate farmer, Keith has forever imprinted love, accountability and sacrifice in the hearts of his family.

Visitation will be Thursday, February 27, 2020 from 5 to 8 p.m. at Sacred Heart Roman Catholic Church in Elk Rapids.  Mass from the Order of Christian Funerals will be celebrated on Friday, February 28 at 11 a.m. with Rev. Nicholas Cooper and Rev. Robert J. Zuchowski presiding.

To order memorial trees or send flowers to the family in memory of Keith Hubbell, please visit our flower store.