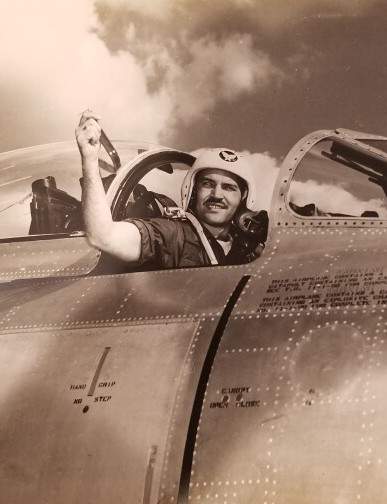 He was born on April 25, 1924, in Waterloo, Iowa, the son of Robert and Eva (Ruggles) Clark, and grew up in Clarkston, Michigan, graduating from Pontiac Senior High School in 1942. He then joined the Army Air Corp and became an Aviation Cadet in 1943, graduating from flying school in June of 1944 as a 2nd Lieutenant in the Air Corp Reserve and a fighter pilot flying the P-40 Curtiss Warhawk. In 1945 he left for combat duty in the SW Pacific, flying the P-51 Mustang against the Japanese. He eventually reached the rank of Lieutenant Colonel.

Joe was a constant learner, earning a B.A. from the University of Maryland, an Engineering degree from Purdue University, with additional studies in Secondary Education at Utah State University. Joe’s education triggered a lifelong interest in philosophy and literature in addition to engineering and aviation.

Everyone who knew Joe agrees that he was a real character. He had a passion for golf, which continued into his 90s, and an additional passion for photography. He was also an animal lover, owning several cats and dogs during his lifetime, Brutus, his Pomeranian poodle mix, being his last. Joe became an avid observer and critic of the political scene, especially recently. If you wanted his opinion, all you had to do was ask. And he was a gifted storyteller, a talent that found a home in his two books: Not Quite a Hero: Fighting the MiGs with Grabeski, Mahurin and Adams, and in 2020, F-86E Sabre vs. Russian MiG-15: Some Korean Air-to-Air War Tales Revisited.

But most of all, Joe loved Torch Lake, his home for over fifty years. His love affair with Torch Lake started as a young boy, and after his retirement from the Air Force in 1964 he purchased land and a cottage on the northwest side of the lake, tore down the cottage, and in 1968, built the house that became his permanent home. Joe had an open-door policy in his home, welcoming friends and taking in folks who needed a place to stay, short or long term.

Joe died peacefully under hospice care. He is survived by his circle of friends, his two children, Randy and Cindy, four grandchildren, and Brutus.

To order memorial trees or send flowers to the family in memory of Joseph Clark, please visit our flower store.