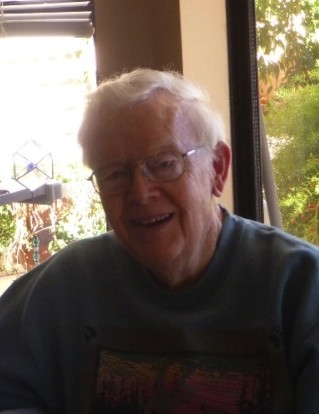 John Vernon Runberg, 91, has passed away to join his wife Joyce on September 20, 2020. He was born on January 18,1929 in Minneapolis, MN to Marguerite (McCann) and Vernon Runberg. He spent a great deal of his childhood on Beaver Island, and attended school there some of his elementary years. He went to a parochial high school in Bay City, and Delta Junior College. John served 2 ½ years in the Navy during the Korean War. He came back and went to MSU on the GI Bill. He worked as a TV Repairman, then as an Instrument Man at Dow Chemical in Midland (30 years).

In Bay City, he was very active golfing, bowling and square dancing. He loved his church, camping, cross-country skiing and traveling all over. He and Joyce traveled to Alaska, Ireland, Nova Scotia, Australia and New Zealand. They visited many of the National Parks in America. They traveled back and forth for 25 years from Arizona to Michigan seasonally, after they were chased out of Florida (10 years) by Hurricane Andrew.

He took early retirement at 55 and they moved to the island into the McCann home; which has been in the family since 1901. On Beaver Island, he and Joyce were licensed Emergency Medical Technicians for about 10 years. John was the  President of the Beaver Island Historical Society for many years. He belonged to the Amvets Post 46 on Beaver Island. Previously, he was involved with the St. Vincent de Paul Society in Bay City for 25 years.

John was always good for a story, and he had some great ones. He will be greatly missed by those who knew and loved him. A memorial mass and burial will take place November 28, 2020, at 11:00 a.m. at Holy Cross Church on Beaver Island. The Visitation will be the night before on 27th at 5:00 p.m. with the Rosary following at 6:00 p.m.  This was also John and Joyce’s Anniversary week, for 65 years of marriage. His family wants to believe they are square dancing right now up in heaven.

In lieu of flowers, please donate to the Beaver Island Medical Center for future Hospice Care.

To order memorial trees or send flowers to the family in memory of John Runberg, please visit our flower store.
Send a Sympathy Card