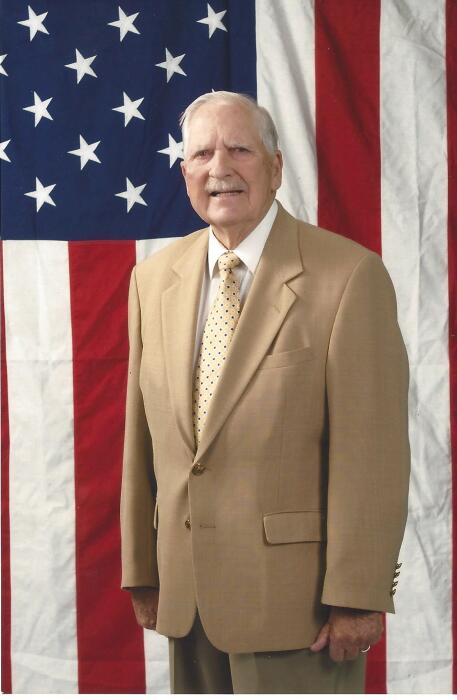 John Maurice "Mo" Madison, 97, went to his heavenly home on August 31, 2020, in Charlevoix, with his beloved wife Mariel at his side.

He was born June 3, 1923 in Detroit, Mich. to Arthur F and Hulda E (Westholm) Madison. John spent his summers on his Mattson grandparents Cheboygan farm. He attended the Henry Ford Trade School in Dearborn and graduated from Mackenzie High School. He has been a resident of this area for over 45 years.

As one of the Greatest Generation, he was a proud veteran of the US Army Air Corps, serving in World War II. Madison was a ball turret gunner on a B-17 for 17 missions and was shot down once. The plane he rode in was crippled, but landed somewhere near Belgium, behind Allied lines. “Back in England that night, nobody knew for sure who was alive, so they just packed up my stuff and sent it all home. My dad thought I was dead, and he just threw it all out.” He is one of the last survivors of the 487th Bomb Group.

For his service he was awarded the Air Medal with 2 Oak Leaf Clusters, the European-African-Middle Eastern Campaign Ribbon with 2 Bronze Stars,  the WWII Victory Medal, the American Defense Medal, the Army of Occupation Medal - Germany and the Good Conduct Medal. He also served in the US Navy Reserve - 1947 – 1952.

In 2010 he was honored to be chosen for participation with other veterans in the Honor Flight to Washington, D.C.  Recently he was presented with a hand-made quilt of valor.

He retired in 1990 after years employed in various positions in industrial, commercial, chemical, and recreational industries.  After retirement he and Mariel traveled extensively in their motor home and spent the last 35 years wintering in warm Florida.  He enjoyed golfing, playing cards, and just chatting with family and friends. He recently received his 45-year coin for active participation in AA. He also ministered in the prison-camps. John dearly loved daily serving the Lord. He will be well remembered for his winsome smile, upbeat attitude, gratitude and by his devotion to God, Country, AA and Family and was proud of his Swedish heritage. He was a lifetime member of the Central Lake VFW, and a member of American Legion of Charlevoix. He was also a member in the Jesus is Lord Community Church of Bayshore.

He was preceded in death by his parents, siblings Dorothy and Edward, and daughter Maureen as well many friends.

Funeral services will take place on Saturday, September 5 at 12 noon at the Winchester Chapel of Mortensen Funeral Homes in Charlevoix. Visitation will be from 11 a.m. until the time of services. A graveside service with military honors, will be at 2:00 p.m. also on Saturday at Southern Cemetery, Central Lake Township.

A private Celebration of Life will be held at the Jesus is Lord Community Church of Bayshore, Charlevoix, on Sunday, September 6, with Rev. Ward Potts conducting the service.

To order memorial trees or send flowers to the family in memory of John Madison, please visit our flower store.