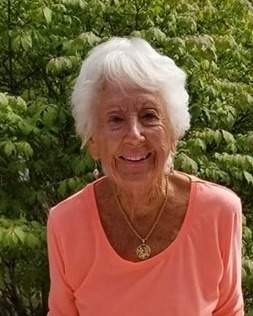 Joanne Maxine Allarding, 92, of Eastport, passed away peacefully on September 11, 2022 surrounded by loved ones.  She was born on September 24, 1929 in Carson City, MI, the daughter of Stanley and Lamoyne (Morgan) Inman.

Joanne graduated from Lake Odessa High School in 1946, and shortly thereafter married her high school sweetheart, Robert Allarding, on December 3, 1947.  They raised their family together in Lansing, and spent their summers at their cabin on Torch Lake.  In 1987, they made Eastport their permanent home, and built a new home where the cabin was originally located.  They also enjoyed spending their winters in Lakeland Florida.

Joanne loved spending time with her growing family at the lake over the years.  With a big family, somebody had to cook, and that somebody was Joanne!  She was well known for her ability to make delicious food in large quantities including her family favorite chocolate chip cookies.  She enjoyed golfing, especially at the Antrim Dells course, where she had been a member for many years.  She also liked to play cards including bridge, and pepper, and the game Rummikub. She was a big fan of the Detroit Tigers and Lions, and rooted for MSU when they were on the field or the court.

Joanne had an infectious personality, a great sense of humor, and was somebody who others were drawn to.  She will be deeply missed by many.

She was preceded in death by her parents; her loving husband, Robert Allarding; her brother, Morgan Inman; and her aunt and uncle, Beulah and Floyd Baxter, who played a key role in helping raise her.

Joanne’s family is planning a memorial at a later date.

In lieu of flowers, memorial contributions may be made to the Congregational Church of Central Lake.

To order memorial trees or send flowers to the family in memory of Joanne Allarding, please visit our flower store.