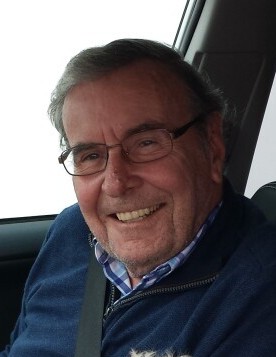 Jim was born on November 13, 1930 in Lansing, MI. to the late Albert Louis and Irene (Cavanagh) Ehinger.  He graduated from East Lansing High School and received his Bachelor’s degree from the University of Notre Dame.  Immediately on graduation he entered the United States Army and served honorably during the Korean War in the Transportation Corp, Port of Anchorage, supplying the DEW Line Project.

Jim believed deeply in The Golden Rule. He served in several civic and philanthropic organizations.  He was a Charter Member and Past President of the East Lansing Rotary Club and a Paul Harris Fellow.   He was a member of the Greater Lansing Board of Realtors and Past Chair of its Historical Committee.  He was a Past member of the Burcham Hills Foundation Board and the YMCA.  During turbulent times he served on the East Lansing Planning Commission and was instrumental in the passing of its first Open Housing Ordinance.

He loved his family, his friends, ‘Up North’ and Notre Dame in that order.  In fifty years he missed only one five year reunion at ND; and, never missed a reunion at East Lansing High School.  Jim’s bright smile will always be remembered and deeply missed.

The Funeral Mass will be celebrated on Monday, October 19, 2020 at 11:00a.m. at St. Thomas Catholic Church in East Lansing, MI. with a Visitation one hour before the Funeral Mass.  Interment will follow at Mt. Hope Cemetery.  Special thanks are given to Mary Ellen Furseth, Pam Oshaben,  Bright Star & Munson Home Health Services for their loving care.  Memorial contributions may be made in Jim’s name to St. Vincent Catholic Charities or the Charlevoix Historical Society.

To order memorial trees or send flowers to the family in memory of James Ehinger, please visit our flower store.