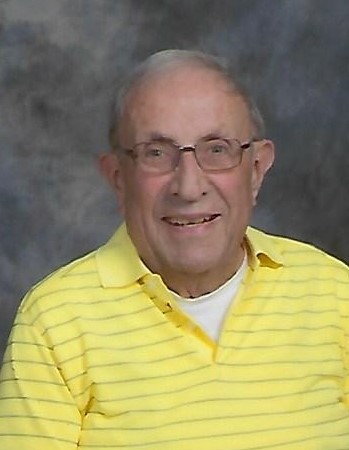 Jim was also known to his friends as “Sam.” His career was spent working for General Motors in their Chevrolet division in Livonia, Michigan.  He was a UAW pipe fitter and retired from General Motors after 25 years of dedicated service. In his spare time, he enjoyed coaching his kids’ sports teams. He was an umpire for the City of Westland Softball Association, and he enjoyed attending his children’s games. He was President of the Livonia Franklin H.S. Patriots Club and helped steer recognition and funding to girls’ sports.

Upon retirement, Jim and Pat moved to Central Lake full-time and became active in the community. They were very involved as members of St. Luke Catholic Church in Bellaire. Jim was a member of the Central Lake Lions Club and often volunteered his time to help others.

Surviving Jim is his wife Pat of 58 years, his children, his beloved grandson Colin Norton of Westland, MI and many nieces and nephews as well as dear friends.  He was preceded in death by his parents and his six siblings: Mary Burns, Joseph Burns, Kathleen Burns, Louis Burns, Cecelia Gray and Theresa DeLaere.

A Memorial Mass will be held at St. Luke Catholic Church at a later date. At that time, graveside services with Military Honors will take place at Southern Cemetery, in Central Lake, MI.

Arrangements have been handled by the Central Lake of Mortensen Funeral Homes.  Please sign his online guestbook www.mortensenfuneralhomes.com.

To order memorial trees or send flowers to the family in memory of James Burns, please visit our flower store.