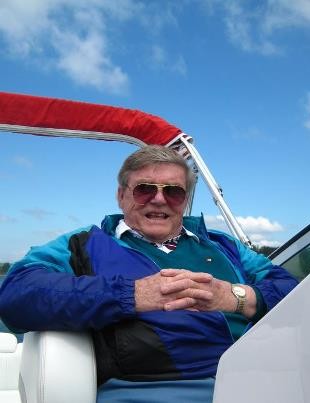 Jim was born May 23rd, 1932 in Winona, Minnesota, the son of Carlton W. and Marcia H. Alger. He spent his youth in Winona and then moved to Fairfax County, near Washington D.C.

While in High School, Jim excelled in football, basketball and baseball. After graduating from Fairfax High School, Jim enlisted in the United States Coast Guard (USCG) on September 3rd, 1952, in Arlington Virginia. His service took him to many locations, the last of which was Charlevoix, arriving Venetian Saturday night in 1954.

Shortly after he arrived, he found the love of his life, Nancy “Faye” Meggison. They were married September 10, 1955. They wanted to have their children while they were young and certainly succeeded with that! By July of 1960, they had 4 children.

Upon leaving the Coast Guard, Jim went to work at the Sinclair gas station and later for Consumer’s Power Company at Big Rock Point for over 30 years.

Jim was dedicated to the Charlevoix community he loved so much. He coached countless youth sports teams, male and female. He also helped start the Little League baseball program, helped build softball and baseball fields on Carpenter Avenue and, in 1977, helped build Charlevoix High School’s first baseball field by the Sherriff’s office.

Jim always enjoyed, loving his ever-growing family, boating, snowmobiling and watching his children and grandchildren participate in sports and other activities.

Jim was an avid Rayder, Shephard Blue Jay, and DeWitt Panther fan. He and Faye served as leaders of the Charlevoix Sports Boosters for 15 years.

The family invites you to the visitation at the Mortensen Funeral Home in Charlevoix, from 5:00-7:00 p.m. Monday October 11, 2021. The funeral will be held at the Charlevoix United Methodist Church at 11:00 a.m. on Tuesday, October 12, 2021. Prior to the service, there will also be visitation from 10:00-10:45 a.m. Kirk Baese, a great and long-time friend of the family will officiate. The burial will follow at the Brookside Cemetery in Charlevoix, where Jim will be laid to rest next to his loving wife, Faye.

In lieu of flowers, the family asks memorial contributions be made to the Charlevoix United Methodist Church or Grandvue Medical Care Facility.

To order memorial trees or send flowers to the family in memory of James Alger, please visit our flower store.