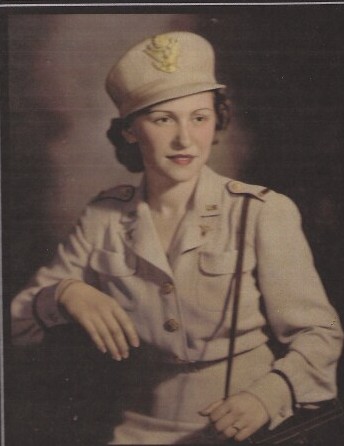 Isabelle Frances Seidel, 100, of Charlevoix passed away on Tuesday, May 26 at the Georgia House in Charlevoix.  She was born on November 29, 1919  in Pioneer, Ohio to Bessie J. Mabel Mercer and Forrest Dohm.

She graduated from Pioneer high school in 1937, and went on to attend the Flower Hospital School of Nursing where she graduated in 1941.  She then joined the United States Army in 1942.  On May 26, 1943 she married Francis Joseph Seidel in the Dentist Office at the Army Hospital in Camp Breckenridge, KY.

Isabelle traveled extensively throughout the US during the war and followed Joe overseas with service in the United Kingdom, France, and Germany.  After the war they stayed in government service in Europe and the US.  She was one of the first Army Reserve nurses recalled to active duty during the Korean War, where she served in military hospitals in Europe. Isabelle and Joe moved to Charlevoix in 1954, and bought a 183 acre working dairy farm.  She went to work for Dr.’s Saltonstall and Grate.  She also spent 3 years at Interlochen Arts Academy while Joe was teaching there, and then  returned to Charlevoix and started working at Charlevoix Hospital where she retired.  Since that time the couple wintered in Plant City, FL.  Joe preceded her in death in 1994.  She continued to winter in FL and spent her summers in Charlevoix.  She was a member of St. Mary’s Church and the VFW Auxiliary.

She is survived by her son Joseph (Gail) Seidel, her granddaughter Amanda, and many nieces and nephews.

She was preceded in death by her husband LTC Francis Joseph Seidel, her parents, an unnamed infant child, and her grandson Joseph Glen Seidel.

Funeral mass will take place at St. Mary's Catholic Church on Friday, June 5, 2020 at 2:00 p.m.  Visitation will be from 12 noon until the time of service at 2:00, also at the church.  Interment to follow at Barnard Cemetery.

To order memorial trees or send flowers to the family in memory of Isabelle Seidel, please visit our flower store.