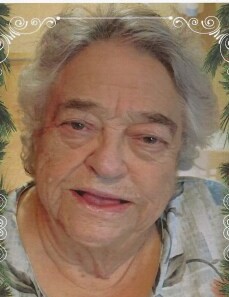 Ila was born on November 30, 1933, in Mancelona Township, the daughter of William and Sarah "Tiny" (Bartholomew) Robbins.

She was a lifelong resident of Mancelona and enjoyed cooking as well as watching several cooking shows, camping, word searches, but most of all being a grandmother and spending time with her family.

She was preceded in death by 5 brothers, Otis, Raymond, Oscar, Wilford, and John Robbins and a sister Irene Fair as well as her parents.

Funeral services will be held privately at the Mancelona Chapel of Mortensen Funeral Homes with Pastor Mark McCool officiating.

Burial will be in the spring in Fairview Cemetery, Mancelona.

Memorial contributions may be made to Shriners Hospital for Children, 2900 Rocky Point Dr., Tampa, FL,  33607.

Arrangements are in the care of the Mancelona Chapel of Mortensen Funeral Homes.  Sign her online guestbook www.mortensenfuneralhomes.com

To order memorial trees or send flowers to the family in memory of Ila Cantrell, please visit our flower store.
Send a Sympathy Card