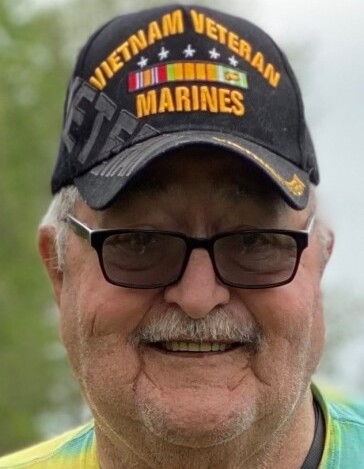 Herbert was born April 3, 1946 in Traverse City the son of Herbert L. and Agnes A. (Henderson) Van.  He graduated from Rapid City High School and was immediately drafted into the U.S. Marines.  He served in the Vietnam War and upon returning home joined the Army Reserves.

Herb worked construction for many years.  After 29 years of dedicated service, Herb retired from the Kalkaska County Road Commission.

He was a proud lifelong member of the Kalkaska VFW and also a member of the Grand Traverse Metis black powder gun club since 1972.  He was the Clearwater Township Fire and Rescue Chief and an overall member for many years.  He often walked in local Pow Wow’s that the veterans were honored in.  Herb also helped many people with their sobriety journey for over 30 years.

Herb enjoyed spending time with his children, grandchildren and great grandchildren.  He was known as the ultimate prankster and friend to all! He also enjoyed hunting, fishing, golfing, and shooting guns.  He taught his grandchildren to shoot.

He was preceded in death by his parents, 2 brothers Richard and Greg Van, sister Rhonda Vasher, and dear friend Grace Van.

In lieu of flowers memorial contributions can be given to the Fisher House, PO BOX 130466, Ann Arbor, MI 48113.  The Fisher House provides support and accommodations to Veterans and their families during their time of need.

To order memorial trees or send flowers to the family in memory of Herbert Van, please visit our flower store.
Send a Sympathy Card