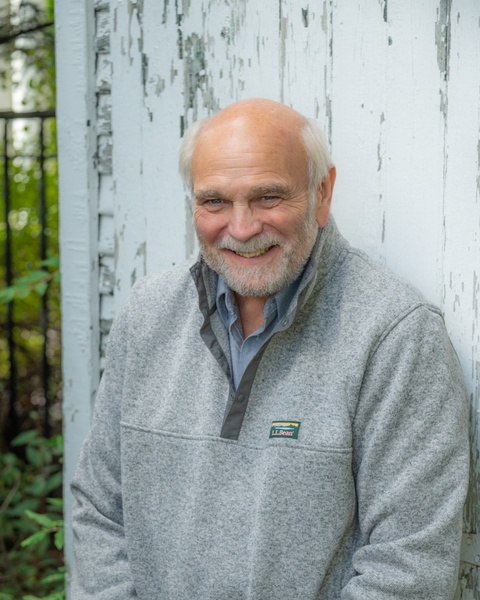 Gregory Lee Stevens went to be with his Lord and Savior on September 22, 2022 after a well fought battle against Ankylosing Spondylitis and more recently with Pulmonary Fibrosis. Greg was the oldest of four boys born to William Jackson and Donna Jean (Donaldson) Stevens on August 10, 1956 in Grand Rapids, Michigan.
Greg was active in Cub Scouts and Boy Scouts, attending Frost Elementary School and Oakley Middle School before his family moved north to Charlevoix where he graduated from Charlevoix Public Schools in 1974. In high school he played football all four years and was a member of the wrestling team for 3 years, lettering in both sports two years in a row. Greg joined his father in the construction business after high school specializing in concrete and masonry. After 25 years in that field he shifted gears to become a concrete and cut stone consultant within Northern Michigan. In May 2005 a job site injury had him change directions once more. He went back to school, attending college at North Central Michigan College in Petoskey, graduating in 2007 with a degree in accounting. He was also active in the community working as a transporter for the Charlevoix County Probate/Family Court as well as serving on the City of Charlevoix Board of Review, Big Rock Advisory Board, and the Design and Development of the Charlevoix Airport. In 2004 he was appointed to the Charlevoix Planning Commission and the Charlevoix Housing Commission. In 2006 he was elected to the Charlevoix City Council 2nd Ward where he was re-elected for three consecutive terms.
Greg is survived by his wife, Kim Brock Stevens whom he married in March of 2020, his daughter (Vicki) LaRae Stevens, his father Bill (Helen Emmons) Stevens, all of Charlevoix; brothers Jeff (Chris) Stevens and Rod (Kim) Stevens of Charlevoix, and Dudley (Brenda) Stevens of Ellsworth; many nieces and nephews whom he greatly enjoyed spending time with.  He is also survived by four stepdaughters and numerous grand children and great grand children in his marriage to Kim.  Greg was preceded in death by his nephew, Riley, in 1998, and his mother, Donna, in 2007.
Visitation is on Friday, September 30, 2022 from 5 pm - 8 pm and on Saturday, October 1, 2022 at 10 am.  Funeral will take place at 11 am on October 1, 2022 with a brunch immediately following. Graveside service will be at Brookside Cemetery in Charlevoix at 2:30 pm. Visitation and Funeral will both be held at Center Point Assembly of God with Pastor Mike Way officiating.
In lieu of flowers, donations can be made in Greg’s honor to Center Point Assembly of God in Charlevoix or the Spondylitis Association of America at spondylitis.org.
Arrangements are in the care of the Charlevoix Chapel of Mortensen Funeral Homes.  Please sign his online guestbook at www.mortensenfuneralhomes.com
To order memorial trees or send flowers to the family in memory of Gregory Stevens, please visit our flower store.