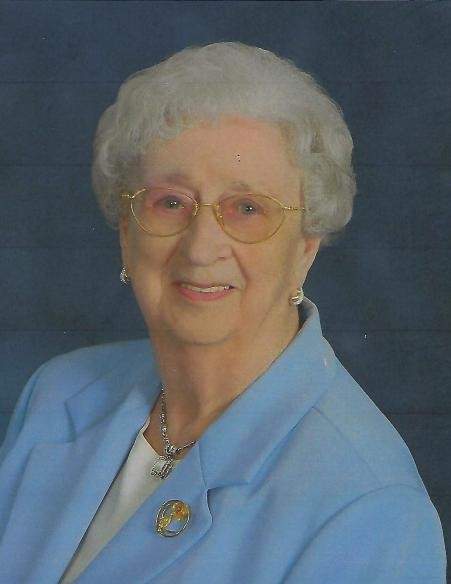 Gertrude Rubingh, 97, of Ellsworth, passed away on December 26, 2019 at the Eastport Village Care Home.  She was born on September 16, 1922 in Lucas, MI, the daughter of John and Alice (Meekhof) Kortman.

On April 20, 1944, in Lucas, MI, she married James Rubingh who preceded her in death in 2008 after 64 years of marriage.  Gertrude was an active member of the Ellsworth Community as well as the Ellsworth Christian Reformed Church.  She was a longtime member of the Michigan Farm Bureau, was a 4H Leader and enjoyed gardening, baking and sewing.

Funeral services will be held Thursday, January 2, 2020 at 2 p.m. at the Ellsworth Christian Reformed Church with Pastor James Zwier officiating.  The family will receive friends from 1 p.m. until the time of service.  Private interment will take place in Ellsworth Cemetery.

Arrangements have been handled by the Ellsworth Chapel of Mortensen Funeral Homes.  Please sign her online guestbook www.mortensenfuneralhomes.com.

To order memorial trees or send flowers to the family in memory of Gertrude Rubingh, please visit our flower store.