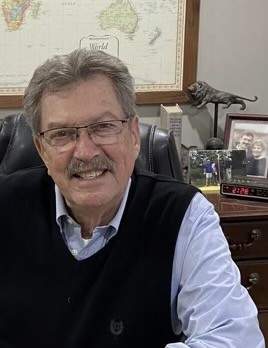 Garrett (Garry) Clark Miller, 77, transitioned from this life to his Eternal life with Jesus on October 26, 2021.

He is also survived by his sisters Janice Leonard, Judy Steffen, Jackie Macdonald, many nephews and

nieces and numerous good friends. He is preceded in death by his parents, Otto and Louise Miller and his son Matthew. What a reunion they must have had!

Garrett is a Vietnam combat veteran who served in the USN aboard USS Belknap (DLG-26) as a Radar Man Second Class.

With a BBA degree in Marketing, he was self employed as a Financial Advisor. As a member of

Charlevoix Community Reformed Church where he served as both a Deacon and Elder. He also served on various committees, his favorite being Missions, of which he was passionate. He served on the Board of The Word of God for Asia ministry.

He was a faithful prayer warrior, meeting daily to pray for needs and concerns of people within the church and community, as well as around the globe.

Garrett’s favorite pastime was golf. He met weekly with special friends, Jim Alton, Pete Petro and Thad McGehee, where nickels were passed back and forth and anyone in ear shot knew he was on the course when his “Puke-in my-socks” shout followed an errant shot.

Memorial contributions can be made to The Word of God for Asia, PO Box 284, Charlevoix, MI 49720.

A Memorial service will be held Friday, June 3 at 1 p.m. at the Community Reformed Church in Charlevoix with Pastors Chip Sauer and Thad McGehee officiating.

To order memorial trees or send flowers to the family in memory of Garrett Miller, please visit our flower store.