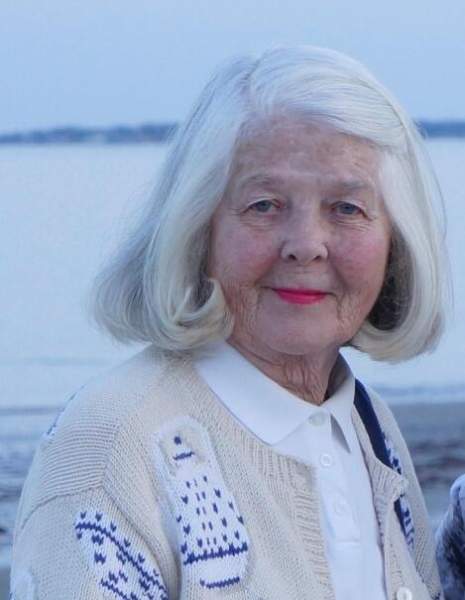 Gail Burlingame Wiemer passed away peacefully on January 1, 2021 in Sarasota, Florida surrounded by her family.  She was born on May 13, 1934 to Alice Wessels Burlingame and William Holten Burlingame.  Gail spent her early years in Shaker Heights, OH, East Lansing, MI. and then attended high school in Birmingham, MI.

In 1952, Gail attended The University of Michigan where she participated in all that campus life had to offer.  Being the elegant beauty that she was, she had many potential suitors, but in keeping with her rebellious inclinations, she broke with expectation and allowed a foreign student with little more than a dream and a unique perspective on life to sweep her off her feet.  Gail joked that she and Hans had to get married quickly because she was written up for being late from their dates so many times, she was in jeopardy of being expelled.

Gail earned a Bachelor’s and a Master’s Degree in Education.  While living in Ann Arbor, she started her career teaching students in an in-patient psychiatric program at the U of M Hospital.

While designing homes in northern Michigan, Hans discovered Charlevoix.  Hans and Gail quickly fell in love with the town and were determined to raise their daughters, Lisa and Ingrid, there.  Gail secured a job which lasted 25 years with Charlevoix-Emmet Intermediate School District as a professional development coordinator, grant writer, teacher for students who were homebound or hospitalized, and developed programs and services for underserved populations.  As a teacher of students who were terminally ill, her care and support for them went above and beyond the scope of her role.  Also, she ensured that pregnant teens remained on the pathway to graduation and college by tutoring them at home.  She often rocked their babies while they took final exams.

Everyone was welcome in Gail’s home.  She befriended people from all walks of life with love and compassion. Many people, like Dennis who lived with the family when he was young, considered her a second mother.  She enjoyed sitting at the kitchen table catching up on people’s lives, listening attentively, doling out advice, lending a helping hand, or slipping someone money to help them get over a rough patch.

Gail loved her family above all else but she also loved a good bargain at Macy’s, peanut butter on a spoon, hunks of chocolate fudge, raw cookie dough, her father’s farmland in Ann Arbor, and restaurant food over her own home cooking.  She also enjoyed her girlfriends, most of which she had known for fifty or more years.

She had only fleeting encounters with vegetables, thought a lady shouldn’t sweat, felt swimming ruins a perfectly good hairdo, that sports are something you watch other people do, and said you don’t really know someone until you understand their backstory.

Gail was kind, gentle, and sweet, unless she was hot on the trail of righting a social injustice, then she became a fierce advocate for those who needed her.  She taught her daughters that it’s not enough that their family is o.k., others need to be o.k. too. She marched, attended rallies, met with leaders, volunteered, and often used her trusted red felt tip pen to write her representatives. Like her mother, she sought to make the world a better place for all humanity.

Gail and Hans were married 65 years and balanced each other out perfectly: she the realist and financial watchdog, he the idealist and believer that anything is possible.  Together they traveled the world, raised their girls, and spoiled their grandsons, Austin (son of Ingrid Wiemer) and Tahoe and Dakota (sons of Lisa and Mads Lillelund).

She is reunited in heaven with her parents, her older brother, and her mother and father in-law.

A celebration of a life well lived, will take place in Charlevoix, MI. in July 2021. In lieu of flowers, memorial contributions can be made to Charlevoix Venetian Festival (venetianfestival.com) or a charity of your choice.

To order memorial trees or send flowers to the family in memory of Gail Wiemer, please visit our flower store.