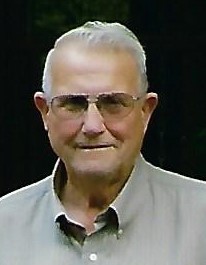 Everett A. Tharp passed into the presence of our Lord March 6, 2020 at Meadow Brook Medical Care Facility, with his family by his side.  The son of James and Eldora (Cooper) Tharp, he was born May 23, 1933.

Everett met his future wife, Joyce (Telgenhof), while roller-skating at the rink in Traverse City and they were married on August 12, 1961 at the Central Lake Methodist Church.

In the early years of their marriage, Everett and Joyce lived in Traverse City, while he worked at J.C. Morgan Canning Company.  They and their young children moved to Central Lake in 1966, when Everett began working at Freedman Artcraft (which later became known as Harbor Industries) a cabinet-making factory in Charlevoix and he remained employed there until his retirement in 1996.  He recognized the value of hard work, and throughout his life he was consistent in displaying a great work ethic and dedication to providing generously for his family, frequently working additional part-time jobs evenings and weekends.

Upon his retirement, Everett began a fun and fulfilling hobby of woodworking and participating in many local arts and crafts shows.  His skill in creating beautiful and unique rustic furniture became well-known in the local area, and many return purchasers added to their collections of his handcrafted items each year.

Among many interest and hobbies, Everett enjoyed raising a large, beautiful garden and berry patch, camping, hunting, fishing and making maple syrup.  He and his family enjoyed many memorable vacations, with favorite destinations being the Eastern states of Massachusetts and Maine; Tennessee and the Great Smoky Mountains; as well as Branson, Missouri.  In keeping with his generous nature, he looked forward to holidays, particularly those that involved gift giving.  Planning for, purchasing and presenting gifts to his wife and family, which also frequently included his artistic, handmade treasures, provided some of his greatest pleasure.

Everett has been an active member of the Central Lake United Methodist Church, where he has served as a trustee, an usher, and was dedicated to helping with the church fundraisers.

As a resident of Meadow Brook Medical Care Facility for the past several years, Everett remained as active there as possible.  He participated in, and looked forward to Sunday morning church and weekly chapel services as well as other resident activities such as bingo, bunko, bowling, painting and ceramics, enjoyed musical programs, and was a member of the Resident Council, serving as president of the group for a period of time.  He maintained his interest in gardening; planting and growing flowers and vegetables in table gardens and window boxes.  Everett’s crafting and artistic talents remained apparent as he spent hours painting decorative birdhouses.  Residing at Meadow Brook, he also found encouragement for himself engaging in diligent efforts to encourage, comfort and assist his fellow residents with his caring friendship.

Everett will be forever loved and remembered by his wife Joyce; his son and daughter in-law George and Yvonne Tharp; daughter and son-in-law Everell and Vern Preston; his grandchildren Alycia Tharp, John Tharp and Faith Tharp, Paul Preston and Chelsie Preston; his extended family; church family; and friends.

To order memorial trees or send flowers to the family in memory of Everett Tharp, please visit our flower store.