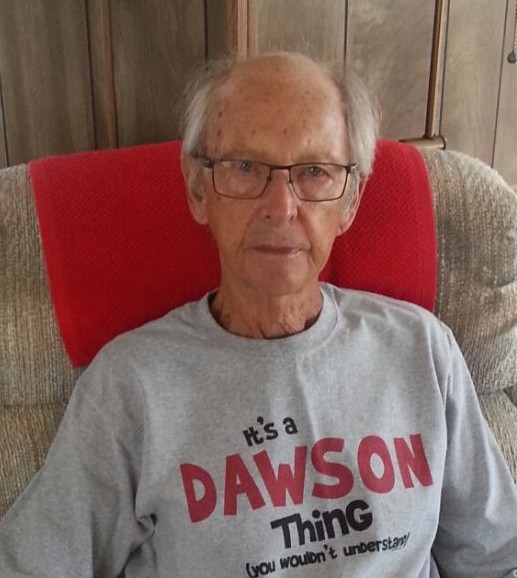 Eugene D. Dawson 87 of Central Lake passed away at home in the early morning hours of March 15, 2022.  Eugene was born at home on October 24, 1935, the first born son of Maurice and Beatrice (McGuire).  Except for a brief period, he lived his entire life in the area.

Eugene attended and graduated from Central Lake High School, where he met the love of his life, JoAnne Denomy.  They were married April 17, 1954 in Charlevoix.

After a brief stint at Pontiac Motors, Gene returned to the Central Lake area where he found employment.  He started with Antrim County Road Commission and eventually retired from Lamina Bronze.  Those were just Gene’s paying jobs.  He was also a cattle rancher, lumberjack, horseman, 4-H leader, baseball coach, farrier, politician, explorer, trail rider, long distance hiker, amateur hoarder, and many other things to many people.

Though he finished his formal education in 1952, Eugene was a lifelong scholar, curious about everything.  He was an avid reader, often 2 to 3 books at a time.  He was fascinated by the west and cowboy culture.  He and JoAnne were able to fulfill his dream by takin many trips out west.

Upon retiring Gene served 3 terms as an Antrim County Commissioner and was a board member and president at Baywinds Credit Union.  Genes attitude, outlook, and philosophy of life was simple, he’d say “I just can’t wait to get up every morning” and he meant it and he lived his life accordingly.

Gene is survived by his wife JoAnne of nearly 68 years, his two sons Jeff (Diane) and Steve (Patti), grandchildren Noah, Connor, and Kelsey, siblings Gary (Lois), Kevin (Vicky), Dave (Lynda) and Craig (Leslie), and many cousins, nieces and nephews.  He was preceded in death by his parents Morrsey and Beatty, son Mike, siblings Arvin and Linda.

Memorial services will be held Monday, March 21st at 11 a.m. at the Central Lake Chapel of Mortensen Funeral Homes.

Memorial Contributions can be given to Camp Hayo-went-ha Scholarship Fund or Hospice of Michigan.

To order memorial trees or send flowers to the family in memory of Eugene "Gene" Dawson, please visit our flower store.
Send a Sympathy Card