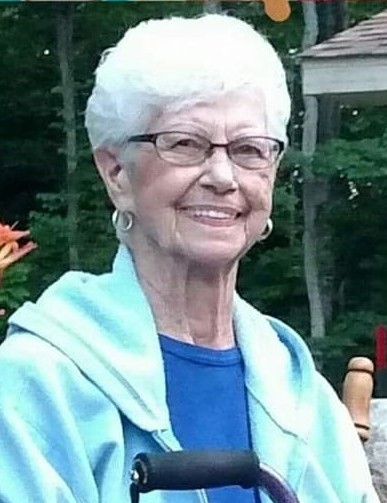 Esther Mae Jolliffe, 83 of Ellsworth, passed away November 24, 2019 at her home, surrounded by her family.

Esther was born May 3, 1936 in Ellsworth, MI to Henry Heeres and Gertrude (Vandenberg) Heeres.

She was a member of the Belltower Reformed Church in Ellsworth, as well as a volunteer at the Good Samaritan in Ellsworth for several years.  Esther enjoyed shopping, baking cookies, traveling, camping, and talking on the phone.  In 1997 Esther traveled to China to help her niece adopt her daughter Taylor.  Family was the first and most important thing to Esther.

Funeral Services will take place Thursday, December 5, 2019 at Belltower Reformed Church in Ellsworth, MI at 1:00 p.m., with visitation going from 11:00 a.m. until the time of service Thursday.  Interment will follow at Norwood Cemetery.

Memorial contributions in Esther’s name may be made to the Good Samaritan, P.O. Box 206, Ellsworth, MI 49729 or to the charity of your choice.

Arrangements are in the care of the Hastings Chapel of Mortensen Funeral Homes.  Sign her online guestbook www.mortensenfuneralhomes.com

To order memorial trees or send flowers to the family in memory of Esther Jolliffe, please visit our flower store.