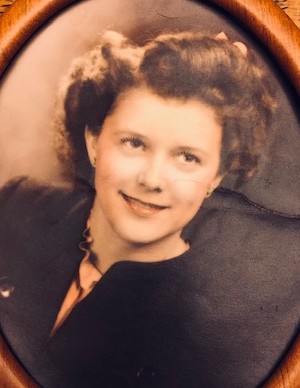 Ella Hennip was born on June 17, 1926, to John and Jennie Hennip. She was said to be only 3 pounds, tiny and fragile, and they kept her in a shoebox in a dresser drawer. She said many times, when she spoke of this, that she not only made it, but whoever thought she'd still be here!

Ella grew up on a farm close to Ellsworth. She retold many times tales of
life then~growing up on a farm, walking to school, swimming in a pond, and all the many friends she made along the way.

She met and fell in love with William (Bill) Hoffman, shortly after WW II ended. He was her brother Pete's friend, who had brought him home to meet her. They married on June 28, 1947, and remained together throughout life until Bill's death in 2001. They had 3 children: Kathy, Nancy, and Ron.

Ella was a very talented knitter and crocheter.  We all received a sampling of her gorgeous doilies, afghans, slippers, blankets and hats, through the years. She had a great love for animals, and always instilled in her children and grandchildren kindness towards them. She had a fun sense of humor at times, making those who might be with her to  laugh, because what she said was not really expected!

She had a deep faith in God, and through her struggles in life counted on this. She lived her life in such a way, that we were all very influenced by this faith.

Left to cherish her memory are her children~Kathy Luther (Rick) of Vacaville, California; Nancy Whitley of Charlevoix ; Ron Hoffman (Mary) of Greensboro, North Carolina and many grandchildren and great grandchildren, nieces and nephews.

Preceding her in death were her husband, William Hoffman (Bill), her son in law Jerome P. Whitley ( Jigs), her parents, John and Jennie Hennip, sister, Johanna Bussler, and her brother Peter Hennip.

Arrangements are being made for a graveside service in the Atwood Cemetery on Church Road, where her husband is now laid to rest, on July 28th at 11AM.

Donations in her name can be sent to Antrim, Charlevoix, or Emmet County Humane Societies, or The Good Samaritan Resale Shop in Ellsworth.

Arrangements are in the care of the Winchester Chapel of Mortensen Funeral Homes. Sign her online guestbook www.mortensenfuneralhomes.com

To order memorial trees or send flowers to the family in memory of Ella Hoffman, please visit our flower store.